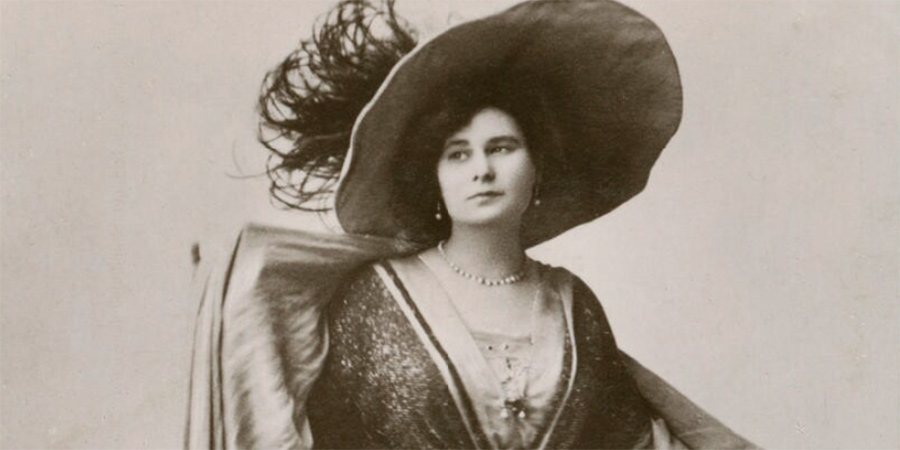 As cockney character Our Lizzie, Millais appeared on Marconi's 2LO London station on October 20th 1922, two days after the BBC formed as a company and three weeks before the BBC's first broadcast.

Millais returned a month later to became the third entertainer to appear on the BBC, after Billy Beer ('Entertainer at the Piano') and Helen Mar (an American raconteuse). This was November 21st, and the new British Broadcasting Company was just one week old.

But for anyone feeling pedantic, we ought to define a few things of Britain's first recorded* comedian** to be broadcast***...

*recorded: Helena Millais is the earliest broadcast comedian that we have recorded, as a clip. You can hear her on this page. Funny, observational, joke-based, creating a scene - she's the Victoria Wood of her day. This was not her original broadcast though. It wasn't until the late 1920s that any radio broadcasts were recorded.

This footage is from a gramophone record she made soon after. The act is likely to have been very similar. This particular copy is from a cassette tape in the loft of comedy historian Alan Stafford, who heard a plea on the podcast for a copy of her act, and had a rummage.

Alan Stafford tells us that Cory played parodies on the piano, Parkyn borrowed from existing songs to make new ones, and Dickeson sang in character as a Somerset farmer.

Paul Kerensa thinks Millais still trumps them, as their acts weren't purely written for the radio. They were performing at an exhibition, to a live audience. Broadcast yes, but like a McIntyrean TV special, the live attendees were the primary audience, and it was existing material.

Acclaimed comedy actor Will Hay also has a claim on being first. He performed an extract of a self-written revue on 2LO on July 29th 1922. Again though, that revue was for a theatrical audience. And was he a comedian, or a comic actor? It's a fine line. Again, we don't have a recording of that revue or excerpt.

Even earlier, in March 1922, Britain's first regular radio presenter Peter Eckersley was doing wacky impressions of opera singers and making up nursery rhymes about engineering. Eckersley later became the BBC's first Chief Engineer. You can hear footage of his wild radio shows on Episode 8 of The British Broadcasting Century Podcast.

***broadcast: Though Will Hay broadcast in July, it was to a garden fete in Horley, as a demonstration of what radio could do. Cory, Parkyn and Dickeson also broadcast, but for a wireless exhibition in Westminster. Narrowcasting not broadcasting then? Well, anyone with a radio set tuned in could have heard it, even if it wasn't intended for them. That's why listeners were called 'listeners-in' at first; the broadcasts weren't technically public...

...until Helena Millais came along. By October 1922, the BBC was days away and broadcasts were aimed at a wider audience.

So Paul and Alan both agree that Millais is our first recorded broadcast comedian. She'd written her act specially, and performed it in an empty studio at Marconi House, to no audible laughter, purely for the audience at home, like a 2020 Zoom gig.

By the time the fees became worthwhile, broadcasting alas moved on to others, like Norman Long, arguably the first to make a career from broadcast comedy. Millais was known to be at home waiting for the phone to ring, forgotten by broadcasting.

So we won't forget her here. Helena Millais: you're a way-paver, and a funny one at that.

Hear more on Helena Millais via The British Broadcasting Century with Paul Kerensa: Episode 16 - Live at the Apo2LO

Alan Stafford's books include It's Friday, It's Crackerjack!