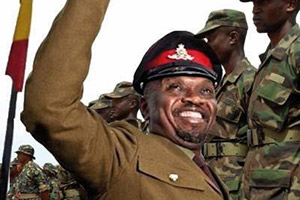 The New King of Scotland is back

President Obonjo tells all about his return to the Edinburgh Festival Fringe.

With poll numbers lower than Count Binface, Piers Corbyn in unlikely to succeed in his bid to become London mayor. But whatever the outcome, he is guaranteed a face-to-face meeting with a world leader. Sort of. For the climate change denying, anti-vaxxer brother of the former Labour leader has landed a booking at the Monkey Business Comedy Club where he will debate with President Obonjo, the self-styled militaristic leader of the Lafta Republic.

The contestants have been revealed for the 2021 UK Pun Championship. Also, the finalists for Silver Stand Up Competition have been announced.

Here's a chat I had last night with Malcolm Hardee Comedy Award winning performer President Obonjo aka Benjamin Bankole Bello for his podcast If Comedians Ruled The World. In the chat, I mention the Zircon satellite, which is incorrect. I think the satellite I should have mentioned was probably an ECHELON one.

President Obonjo is under house arrest

Comedy dictator and Fringe favourite tells us how lockdown has put his rise to power on hold.

BBC & E4 'theft': A plagiarist in both their houses?

BBC Studios have become embroiled in what they are claiming is the theft both of one of their programmes and of their name by a company calling itself BBC Stewdios.

Thieves at BBC nominated for a Malcolm Hardee Award

In what could be read as a two-finger sign to BBC Studios, 'President Obonjo' has today made a clean sweep in nominations for the three annual Malcolm Hardee Awards at the Edinburgh Fringe.