BBC Children's in-house productions has announced it is making a second series of The Amelia Gething Complex.

The surreal sketch show, which incorporates sitcom elements, is fronted by social media star Amelia Gething. It will return for eight more episodes in 2021.

Producers confirm: "The second series will again air on BBC iPlayer, transmitting in 2021 and will once again follow the crazy world of Amelia and her flatmates and friends as they navigate the extraordinary situations life throws at them.

"A sketch show with a difference, The Amelia Gething Complex adopts the form of a live action cartoon, which takes you on a dark and twisted journey where rules can be broken and ridiculous things happen.

"Aimed at a teen/young adult audience, the show plays with traditional comedy show formats, with the cast frequently breaking the fourth wall, hundreds of running gags and 'Easter eggs', and sketches leading into increasingly unexpected directions.

"Amelia lives with her flatmates Vinny and Poppy in a weird apartment that leads to infinite parallel universes. Along with their neighbour Wallace, they tackle bizarre situations - like Amelia becoming a despotic Prime Minister and an apocalypse caused by the show's extras."

Amelia Gething says: "I'm super excited to have a second series of the show commissioned - filming Series 1 was such a blast and I had the best time, so I can't wait for Series 2! The process so far has been quite different in comparison to the first season because of quarantine (having a writers room on Zoom is very strange! Haha) and the cast and I will have to bubble when filming which will be very different but I'm excited and delighted nonetheless!"

Amelia Gething also stars in The Spanish Princess, which starts this weekend (on platforms including Amazon Prime Video), and she is working on "more big and small screen projects to announced early in the new year". 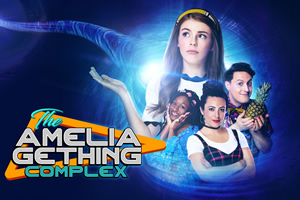