The five-minute shows have been written by "brand new" Northern Irish comedy writers. The BBC explains: "Selected from hundreds of applicants from an open call by BBC Writersroom in Belfast, the writers have each produced a comedy-horror short with a Halloween theme showcasing new scripted-comedy talent."

The episodes, which have been published under the title Fright Shorts, have been script edited by Jeremy Dyson from The League Of Gentleman. The series was produced by new Belfast based start-up Nice One Productions, working in partnership with Retort, with George Kane as the director.

Chris Jones, the founder of Nice One Productions, adds: "I'm delighted that Fright Shorts is our very first new Northern Ireland comedy commission and hope comedy-horror fans all over the UK will enjoy binge-watching the series on BBC iPlayer - with six sparky and distinctive scripts, Fright Shorts is a proper Halloween treat, bursting to life with such a funny cast, a visionary director and the hardest-working crew in Northern Ireland."

The six Fright Shorts are:

The tale of two teenage 'trick or treaters' who get more than they bargained for when they knock on the door of an old lady. Written by Stephen Large and starring Stella McCusker, Michael Stranney and Aimee Richardson.

Derek And The Evil Halloween Pigeon

A story written by Martha Barnett, starring Gerard McCabe and Tara Lynne O'Neill. It sees straight-laced Derek battle the Evil Halloween Pigeon and his unhinged flatmate to make it to his date on time.

Comedy that explores how Paul and best-friend Dennis cope when tragedy strikes. It's written by Peter Gray and stars Michael Liebmann, Gerard McCabe and Roma Tomelty.

Written by Michael McCullough, this short follows Death on her frustrating day at the office and a strange visit to the Donnelly's for Halloween. The actors are Dan Gordon, Chris Patrick-Simpson, Julia Dearden and Eleanor Tiernan.

The Worst Halloween Ever

Two fancy dress shop employees are accosted by a vampire, witch and mummy, however they learn their spooky visitors may not be the stereotypical monsters they appear. Created by Dave Kinghan and featuring Peter Campion, Bronagh Waugh, Karen Hassan, David Elliott, Shane Todd and Jason Byrne.

The comedies can be watched now on BBC iPlayer 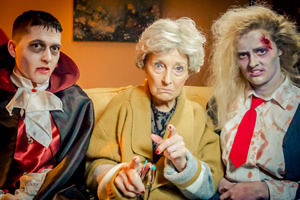 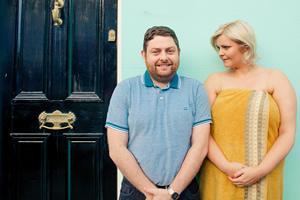 Derek And The Evil Halloween Pigeon 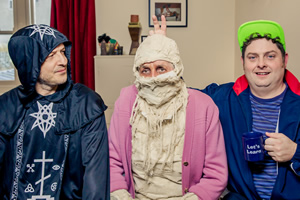 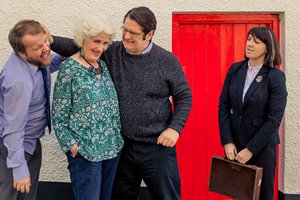 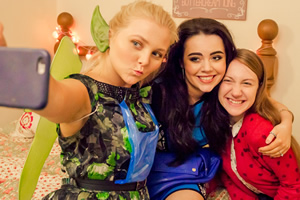 The Worst Halloween Ever 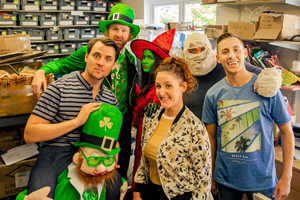