Leicester Comedy Festival has announced Johnny Vegas as its Legend of Comedy award winner for 2020.

In a ceremony streamed online due to the covid-19 lockdown, a range of prizes were given out, primarily recognising the winners' respective contributions to the annual festival, held in February.

Vegas said: "Thank you Leicester Comedy Festival for this Legend of Comedy award. It's a nice way of people saying you are ready to retire but still I'm really humbled. Outside of St Helens no one would know who Johnny Vegas was if it wasn't for you, giving me that big break all those years ago. I'm chuffed to bits; it's a shame we can't all be there and raise a glass and make things messy. But you've made me a very happy man. Cheers!" 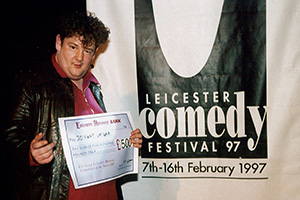 Festival director, Geoff Rowe added: "It was fantastic to be able to recognise Johnny Vegas and present him with the Legend of Comedy award. Johnny has been a long-time friend of the festival, since he won the Leicester Mercury Comedian of the Year Competition at the festival in 1997 (pictured). Huge congratulations to him and all the other nominees and winners. We'll see you all again when Leicester Comedy Festival returns in February 2021!"

The festival's other winners for 2020 were as follows:

You can re-watch the online awards ceremony via Facebook