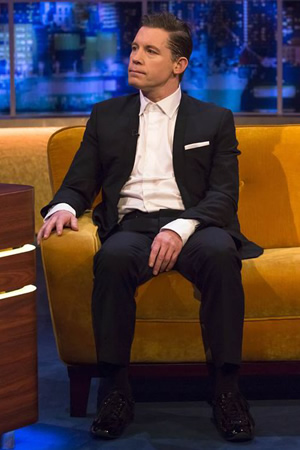 Lee Evans has announced he is to retire from comedy at the end of the month.

The comedian, who is one of the UK's best known stand-ups, confirmed: "This is it. Finished... It's the end."

Evans, who has been performing since the 1980s, revealed his decision during the recording of this Saturday's episode of The Jonathan Ross Show.

In an emotional and moving interview, the comedy star explained he wanted to spend more time with his wife. Referring to his comedy career, he confirmed: "I'm not doing anything. This is it. Yeah finished."

Explaining his thinking to Jonathan Ross, he said: "I started off cleaning toilets when I was a kid and I've had loads of jobs and I just kept working and working and working and my dad always said to us 'you've got to work' so I've just continuously worked, done comedy, toured, but I've ignored, I think for far too long, my missus and I want to spend a lot more time with her."

He continued: "This is it, I ain't doing nothing. I'm going to go and see my wife, I'm going to give her a big hug and say 'I am yours' and I know what'll happen, in a week [she'll say] 'get out, you're getting on my nerves!' But I've said to her, 'look love, I'm really sorry that I'm always away.' I'm a nightmare to live with because I'm always working... I don't know I've come to a junction in my life where - please forgive me it sounds very narcissistic - I've done musicals and plays and films and stand-up and you sort of get to a point where you go 'I don't know what else to do next.'"

Asking whether he wants to retire because there's no challenge or because he wants to be with his family, Lee simply replied: "I've just got to go and see my wife. I love her very, very much."

Evans also spoke about the death of his manager, Addison Cresswell. Dubbed comedy's 'super agent', Cresswell - who also managed Jonathan Ross and a number of other top stars - died unexpectedly last year at the age of 53. "He was a great bloke. I mean he was completely... anyone who knows him always says the same thing 'he's mental, your manager!'". 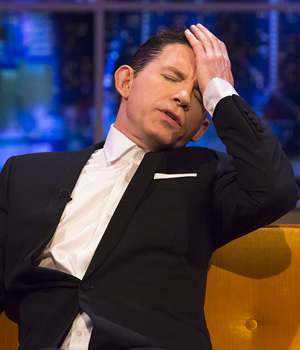 Cresswell managed Lee for his whole career. The comedian reminisced about their relationship: "He used to say to me every gig I ever did he used to get me round the neck and he'd say 'Lee, this is your Wembley!' and then one day, we played Wembley and he knocked on my dressing room and he said 'Lee this is your Wembley' and I went 'Addison, this is Wembley!' and he went 'Oh yeah we're at Wembley, how about that!' So I started off with him, I was just a kid... I've known him ever since I was a kid."

Jonathan Ross, mentioning some of the other comedy stars the agent managed, including Michael McIntyre and Alan Carr, told Evans: "I always got the feeling that the two guys he was closest to was you and Jack Dee because he'd known you all along and I thought you in particular, you had a relationship which was - even though you were essentially the same age - it was a bit like a father and son relationship..."

Evans agreed and, visibly choked, added: "All I've ever done is work and Addison used to put his arm around me and say 'don't worry, it's alright, I'll look after you, it's ok.'"

Evans responded: "No I'm not at all, no absolutely not, it happens in life, people pass away that's what happens... It really does put things in perspective. For example, doing these arenas right, what happens is, it's absolutely amazing because it's so humbling... You walk out and you do three or four or five nights... and loads of people turn up and we have a massive big laugh and the atmosphere is amazing and it's just a humbling experience and you're standing on stage going 'I want to take this in because it's really important because it doesn't last long.'" 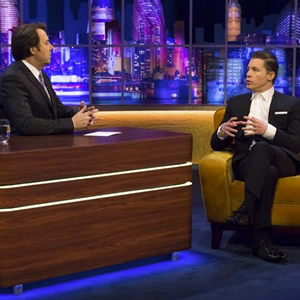 The comedian explained he will be dedicating his time to his wife and Molly, his daughter, now. "I want to go and see my wife, she deserves my time, I've been working solidly. I want to be there... every single week I've been doing plays and... I've always said to Little Mo [his daughter] 'I'm sorry Little Mo I can't go to the school play because I've got to do this work...' Now I can go 'Yeah let's go and see Little Mo, let's go and be with Hev [his wife, Heather] let's go and do the stuff that we never did when we were kids.'"

At the end of the emotional interview, Ross finished with: "Well I hope that you will still find time to come back and entertain us on television with appearances like this whenever you have the time, whenever you have the inclination because I'm going to keep asking!" to which Evans responded "I love you very much, thank you Jonathan, you're a really good bloke."

Earlier in the week, in an interview with The Sun, Lee Evans revealed he had been battling with depression. He said: "I get very gloomy and dark, very deep and depressed. Everyone does sometimes, don't they? I can sit there for ages, with my head in my hands."

Evans is unlikely to need to work again if he doesn't want to. He has earned millions from his tours and DVDs, with his Roadrunner show alone having reportedly grossed over £12m. In an interview with The Telegraph last year he said: "The one thing you can do if you've earned a few bob is buy your freedom."

The tour of Monsters is scheduled to end at the Motorpoint Arena in Cardiff on Sunday 30th November. The show is now available to buy on DVD

The full interview will be screened on The Jonathan Ross Show on ITV on Saturday at 10:45pm.