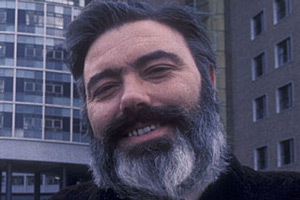 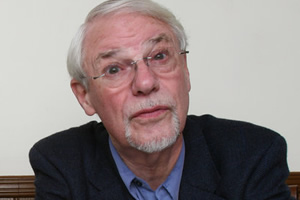 Comedy as a passion rather than just as pure entertainment began for me as an unpleasant seven year old back in the mid-70s. For no discernible reason that I can recall, I was handed a Tony Hancock LP of recordings of two TV shows, "The Blood Donor" and "The Radio Ham". To this day I have no idea why it was given to me - I was born after the death of Hancock, one British comedy's greatest ever performers, and at that time I was far more interested in football than humour. However, as soon as I started listening I was hooked and began avidly collecting his other recordings after that.

A few weeks ago I purchased a 2CD set featuring two long thought lost "Hancock's Half Hour" radio episodes and a couple of interviews with scriptwriting legends, Ray Galton and Alan Simpson. This reminded me of a time, not too long ago, where I experienced one of the greatest privileges of my life which I would like to share with you now.

During the summer in 2004 I became aware of a couple of notable comedy milestones which nudged the literary ambitions within me. My original plan was to write and publish an article to commemorate what would've been Hancock's 80th birthday and 50th anniversary of the very first of his "Hancock's Half Hour" show.

With a little searching of the web I found a contact address for Ray and Alan's agent and subsequently sent a speculative email asking if I could send a few questions for them to answer. What I didn't expect was to receive an invitation to meet them in person at Ray's very own home!

Thinking back I can't quite believe it happened. This turned out to be a truly awesome experience and just shows what can happen - and who you can meet - if you ask the right questions of the right people.

Ray's house is located out in West London on the edge a beautiful city park. I found the front of the property which was surrounded by a high wall and entered via a fairly non-descript side gate. I ascended the front steps where I was greeted by Ray and his pet dog.

This was totally surreal - I was in the actual home of a childhood hero. The house is seriously grand but appears a little faded around the edges these days but would still be comfortably into seven figures in the property market.

Glancing to my left as i stood in the hallway I could see an overstocked library with numerous books piled high on the floor and to my right a sumptuous drawing room. I was immediately offered coffee and led down the hall passing paintings on the wall that I'd seen before in the background of grainy black and white photographs of the two writers. I'd never been here before but it all seemed so reassuringly familiar.

We headed to the back of the house and a minuscule kitchen with random, unmatching appliances and decor. This place hadn't been done up in years and it was all the more appealing for it. To be sat at Ray's kitchen table as he boiled the kettle on my behalf was the most bizarre thing.

Of course, we were still missing the other half of the dynamic duo and it must've been a good 20 minutes before Alan arrived. We decanted ourselves from what was probably one of the smallest rooms in the house and back to the drawing room.

There was a little chit-chat before I nervously asked if I would be allowed to record the interview. This was thankfully not a problem and I placed my laptop on the table in front of them and prayed that the battery and recording equipment wouldn't let me down.

We began at the beginning with when they first met at a tuberculosis sanatorium on the Isle of Wight. It was while here that Ray and Alan decided to write some comedy programs together inspired by radio shows such as "Take it from Here" and "The Goon Show".

On leaving the sanatorium the boys continued their partnership and by 1952 they were writing regularly for the BBC. It was shortly after this date that they met Tony Hancock for the first time. Tony was present when one of their sketches was being performed on a London stage and he liked what he heard. It was this meeting that ultimately launched Hancock's working relationship with Ray and Alan where they wrote pretty much everything that he performed from radio, stage, television and film for the next seven years.

The interview filled in many gaps in my knowledge of their respective careers but what I did know was clearly a contributory factor in us establishing a rapport between us. However, I did manage to instigate some heated exchanges between them both as they disagreed and challenged detail and so-called fact from the Hancock biography by the comedian's second wife, Freddie. Despite this, questions always ended with a "What does it matter? It was a long time ago".

Following the dropping of Sid James from the TV series in what appeared brutal circumstances, Hancock went on to produce some of his best work including "The Blood Donor" and "The Radio Ham" mentioned earlier. Despite this, the cracks were beginning to show and once Tony used idiot cards in place of learning his script he was on a slippery slope.

It should be noted that the idiot cards were necessary at first as Hancock had been involved in a car accident but it became too tempting an option to continue once his drinking took hold. He was never the same performer again but his brilliance was still clear for all to see.

Hancock was driven by the desire for international stardom. His first starring film, "The Rebel", was a success which used glamourous locations and great script but it was still unquestionably English.

To follow this up Ray and Alan told me that completed two scripts which were ultimately abandoned for not being international enough. The process of declining scripts usually involved Tony telling them that "something was not quite right" and then going quiet on them following rewrites. It was after the second script was unceremoniously dumped - for neither of which had they been paid - that was the straw that broke the camel's back. Possibly the greatest of all writer/performer comedy partnerships was over.

Hancock's second film eventually did appear but was in complete contrast to what he was searching. It was called "The Punch and Judy Man" and set in a drab English seaside resort and therefore doomed to only to succeed in the UK. It was also shot in black and white as opposed to the colour of "The Rebel" which may be a sign that film backers were more than a little nervous, as the poor script and Hancock's drinking risked takings at the box-office.

As we discussed Hancock's slow career death which took the best part of seven years it was obvious that what happened bothers them still. A great talent was clearly wasted as he died by his own hand in Australia while making his final TV series.

Following the break-up with Hancock in the early sixties we discussed another major project of theirs, "Comedy Playhouse", which produced another British comedy classic, Steptoe and Son. This was fascinating in itself as I learned about the work involved and the nitty-gritty of writing.

For Steptoe, originally titled "The Offer", Wilfred Bramble and Harry H Corbett were brought in as actors to perform a different type of comedy not seen before on British television. It was very dark and was played to perfection by the Bramble and Corbett. The simple assertion that they were in conflict but unavoidably tied together by blood made for some harrowing viewing. All Harold's attempts at freedom failed which in many ways emulated real life as Harry, a very successful stage actor, found serious work dry up as he was unavoidably typecast.

I learned that day something that in hindsight is glaringly obvious. Comedy has nothing to do with situation but is all about relationships and how people react with each other.

Bringing the discussion right up to date I asked them both about the results for the "Best British Sitcom" TV show on the BBC. Consensus was that 30 for Hancock was pretty good ranking considering its age, the quality of the black and white film and that it doesn't get shown that often. Steptoe was placed at 15 and it was felt that the subject matter meant that it wasn't repeated as often as it might be either. Was there a little resentment at the lack of repeat fees? Quite possibly.

Our interview was now over. I'm glad to say that my recording equipment didn't disappoint and I am left with 80 minute CD which I edited together from over two hours of material plus an autographed copy of a book of Tony Hancock photographs. Fantastic!

Even if old British comedy is of no interest to you this story should act as an inspiration to many. I could told myself that these two great guys wouldn't have time to talk to me but how would I know for sure unless I ask them? Let's face it, I had nothing to lose and so it proved.

As the saying goes: "Ask and you shall receive".

Typically I've seen several glaring errors in it since posting it in the early hours so I'll put those right later.

Er, I'd probably like to hear more of them talking, if you do similar interviews, Tuumble, but well done.

Er, I'd probably like to hear more of them talking, if you do similar interviews, Tuumble, but well done.


It's a fair point. It was written far more from a personal experience point of view partly rather than the actual history because a lot of the information is fairly easy to come by already. This way you at least get a view of side of them that you might now always get to know about.

It's a fair point. It was written far more from a personal experience point of view partly rather than the actual history because a lot of the information is fairly easy to come by already. This way you at least get a view of side of them that you might now always get to know about.