I should be only watching my default no later than 1959 films, but I watched this because a 14 year old Sally Thomsett was in it, playing the rather frumpy Gerty, one of the gang that finds a discarded doctor's bag that has 70 deadly cyanide pills in it, which for some reason look like Smarties. Ohh Err. 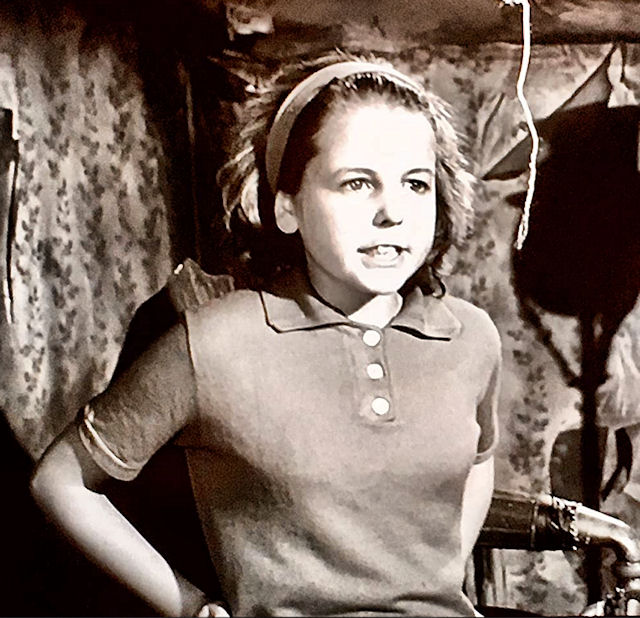 From the CFF again, and not a bad film with Warren Mitchell as one of the comic robbers who stole the doctor's car, a rather nice two tone Humber Hawk Series I.

Some of the children went on to better things and there were a few faces, like Leslie Dwyer (Mr Partridge - Hi De Hi) and Harry Fowler in his usual cockney barrer boy part.

IMDb:-
A gang of children, "The Rockets" have their clubhouse (above an old garage) used by a pair of villains on the run. The villains have stolen a doctors car which had some deadly pills left in it. One of the children finds the pills and, thinking they are sweets, shares them out to the rest of the gang. The race is on for the police to find them all before the children eat any of the deadly pills.

My God, how many times had this thin "plot" been made into a film. I've lost count.

BUT, this was better than average, starring our Canadian/American Paul Carpenter as one of the reporters, along with Adrienne Corri and Hazel Court vying for his attention.

Blonde model, who is blackmailing various clients, is strangled in her flat with her own silk stockings and the race is on to find the villain, as various red herrings make an appearance.

Also starring Alfie Bass as a photographer and Harry Fowler playing someone called Alfie - hope it wasn't confusing on the set.

Just about worth a watch.

Odd one from the CFF, as it appears the main parts of a family with three children, were played by a real life family who never did anything in films again. The other main actor was one called Richard Palmer who had a short career in TV, most notably being Harry Wharton in the late 50s BBC TV series "Billy Bunter of Greyfriars School".

So, he lives with his mother who is a housekeeper for a grumpy antique dealer and dreams of buying his mother a local cottage so she doesn't have to work anymore. His mother shows him a piece of parchment from the Civil War that indicates there is treasure, once owned by his Royalist ancestor, hidden in the nearby mill (actually Ardleigh Mill, Colchester in Essex, which still stands), but the grumpy antique dealer over hears the conversation and decides to find the treasure for himself.

So, the hunt is on, but it is complicated when a family move into the mill house.

Not a bad film, and clearly filmed silently as you can tell that all the dialogue was put on afterwards.

Love the Happy Birthday ad with "six years of chills and spills, cowboys and comedians and quite a lot of Sam Kidd"

My kid brother always said it wasn't a proper war film unless Sam popped up somewhere as an air mechanic, stoker on a destroyer or gunner in the Dessert Rats

Amazing coincidence that an escaped prisoner holds up in a cottage, in the middle of nowhere, that is occupied by someone who looks exactly like him (Emrys Jones played both parts) and uses this to create a new identity for himself by murdering his "twin", but doesn't realise that the man he has just murdered is a fifth columnist and is being watched by the police and authorities.

He gets away with it, except for, the fact that he is right handed and smokes, whereas his murder victim was the opposite, and so the local police get suspicious.

When a ship off the coast goes up in an explosion, it is thought to be an errant WWII mine, but foreign agents seem to be the culprits and so the plot thickens, and finishes in a quite exciting end.

CFF film about a young Polish orphan refugee boy (played by a Eugeniusz Chylek, who I can find NO details for), who runs away from his Edinburgh foster mother, because she treats him little better than a slave. He escapes, but gets involved in two comic bungling burglars in the form of Sydney Tafler and Michael Balfour, and finishes up with their loot, which they try and get back from him.

Through various forms of transport ( you can just see some kid doing this nowadays!!) he finished up in a nice orphanage in the wilds of Scotland by Loch Earn where he is welcomed by all and sundry, but his main aim is to get back to Poland.

Charming story and well made, but none of the child actors seem to have made a life in the films, and the only other actor of any note was John Laurie as a policeman.

Another pre-war film that was well worth a watch (unusually), featuring various stories centred around people going away for the weekend, the main story being about a nurse (gorgeous Margaret Lockwood) being badly affected by the death of a woman in child birth (surgeon played by Felix Aylmer) as she could see the husband would undoubtedly commit suicide.

Nevertheless, she goes on the holiday with her "boyfriend" (Hugh Williams, father of Simon) for a dirty weekend, but regrets it, as the widower plays on her mind.

Comic family light relief in the form of Wally Patch and Kathleen Harrison with their brood and very funny police station sergeant Wilfrid Lawson, when Lockwood gets mixed up with a small time crook, as she tries to make her way back home.

Yes, I enjoyed that.

Wilfrid Lawson again! This time in the main role of a taxi driver who finds a greyhound pup in his cab and gives it to his daughter, and it turns out the dog is a great racer with an excellent pedigree, so they decide to race it; but evil local dodgy character Peter Bull does his best to "acquire" the dog for his own stable.

And so, local cabbies decide to help Lawson retrieve the dog to prove that he is the rightful owner.

Quite enjoyable and worth a look. No one else particularly famous in it.

I struggled with this, as there were a lot of French actors in it and half the time I couldn't make out what they were saying. I'll leave it to the IMDb summary:

A Frenchwoman accused of the murder of her child's father in an English court rejects her defence lawyer. At the request of a Frenchman who saved his life during the war, a family solicitor reluctantly takes on the case.

Along the way the English solicitor, while investigating in France stumbles in on a counterfeit business using Nazi printing plates, and so gets himself into hot water, until the French police intervene.

Only notable faces were Donald Wolfit as the judge, Stephen Murray as a barrister, Kynaston Reeves one witness and bloomin' heck (!) Sydney Tafler as a dodgy French waiter.

This sounds like an early horror film, but it is a pirate/smugglers film set in the 18th century, and just the sort of film I enjoy. However, made pre war? Suggests crude filming etc. and it was, BUT I stuck with because it had George Arliss (in his last film) in the starring part, and I had never seen him in a film. And I wanted to see what he was like, because he was one of the awful impersonations that Tony Hancock insisted on doing, right up into the 60s, when no one remembered the actor, The Lad was badly trying to do.

Also had in it Graham Moffatt, without Moore Marriott, which was a shame, as he would have suited this film, especially as Moffatt played it for laughs. Also had the gorgeous Margaret Lockwood as the love interest and a major part for Wally Patch.

About 80 minutes long, and just about worth a watch.

At just over an hour long, it wasn't bad murder "would the Yank get the blame?" as this USAF sergeant is the last person seen with a woman who is later found dead, and the reluctant star witness is, of all people, the woman's little lad.

Odd thing about the little lad (John Dare) who played this 5-year-old (?) is this was his first film - he made another one in 1962, and that was it, which wasn't unusual for child actors, I've found, to have short careers. BUT in his IMDb profile it shows him in a third film, which is in post-production(!), where his part is listed as "Grandpa Ollie"!!

So, two films to his credit when he was 5/6 years old and now, exactly 60 years later he appears in another one. I wonder what he was doing in all those intervening years?

Thought I'd seen this before, but must be because it is very similar to another film/case that ace PI Duke Martin (Tom Conway - George Sanders' brother) had done a couple like this previous.

Not a bad little caper of greedy people wanting to get their hands on the secret formula that stops making metal suffer from fatigue in high-speed jet planes. I had to smile though, as early in the film it has a shot of a 4-prop airliner landing and clearly the "sound effect" was of a single engine plane.

Just over an hour long it doesn't tax you and it jolly's along with a death of the chemist, a kidnapped girl and various people trying to retrieve the formula from our hero Duke, who is always one step ahead of them.

Love interest is supplied by Honor Blackman, Duke Martin's sidekick Michael Balfour and the dastardly Alexander Gauge again, who I've seen in two or three films now, so am perplexed as to why he committed suicide when he thought he'd been typecast after his stint as Friar Tuck in the popular "The Adventures of Robin Hood" TV series from the same period.

Bit part for Freddie Mills the boxer (someone else who committed suicide, or was it a London gang hit) as barman/heavy, and surprise, surprise Arthur Lowe as a chemist with a photo lab.

Just over an hour long .

Those were the days! I looked it up, 1hr 12m! Now that's a running time! I love how a lot of old films managed to get the job done in a brisk no-nonsense fashion. Films could do with that economy now.

Those were the days! I looked it up, 1hr 12m! Now that's a running time! I love how a lot of old films managed to get the job done in a brisk no-nonsense fashion. Films could do with that economy now.

Yes, this is what I love about pre/post WWII B&W British films**, that were made on a budget and despite their shortness, had a beginning, middle and satisfactory ending, where you're not scratching your head and muttering WTF was that all about.

I got talked into recording "Meet Joe Black" from 1998, but it's 3 hours long! Maybe, I'll watch it in bits, but if it doesn't grab me in the first hour, then it'll be deleted.

** Of course, these B features were just part of a whole evening of entertainment at the cinema when they were originally released - now you just get one effin' long film. No main feature, no B film, no Pearl and Dean, no cartoon, no Pathe newsreel or Look at Life, and the hilarious adverts advertising the local restaurant "just a minute's walk from this cinema"

Ahh, happy days - a veritable evening's feast of entertainment, and all for only 1/9d or 2/6d in the circle.