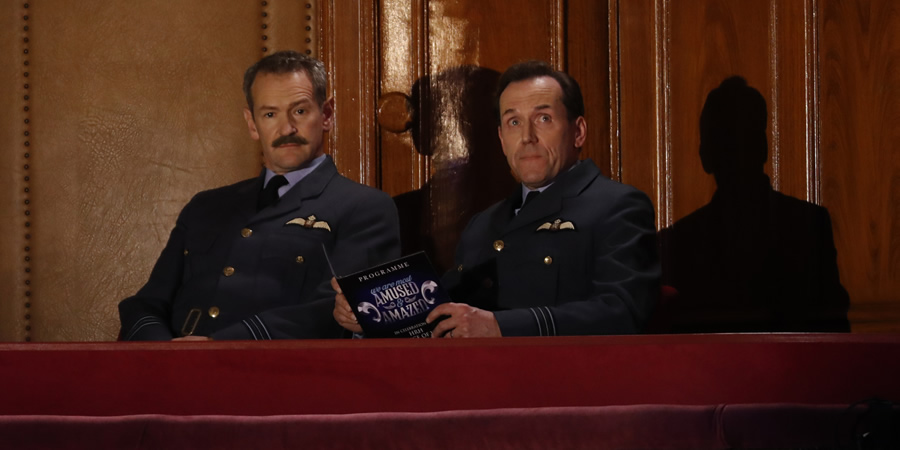 We Are Most Amused & Amazed

Two hours of comedy and magic broadcast from the London Palladium to celebrate Prince Charles's seventieth birthday? Nothing wrong with that, of course, but I think somebody forgot that this is 2018 rather than 1958. Accordingly, we don't need some woman opening the show with a rendition of the national anthem and we don't need the Welsh Guards. What we need is what it said on the tin - comedy and magic.

The show started with various celebrities doing individual little bits to camera but, because there was no audience present, I did wonder where all the laughter was coming from. It was of course coming from a can. As if that were not bad enough, they were tacking canned laughs onto things which were simply not funny such as Martin Freeman turning to camera and saying "Hi, I'm Martin Freeman."

As I write these words, I've only watched the first seven minutes but it does seem to be a toe-curlingly grovelling affair.

Where's Catherine Tate when you need her?

Agreed. It need someone like Frankie Boyle or Katherine Ryan. Even Penn and Teller doing something with a bit of blood would have been better.

I liked Penn and Teller, and Armstrong and Miller back together. Rowan Atkinson's reprise of his devil sketch was nice to see.

I didn't say I didn't like it, just felt it needed a bit more.

The Royal Family is being pretty mean on its YouTube channel with only this meager meet n greet offering for us loyal subjects of the Crown out here in the imperial colonies: https://www.youtube.com/watch?v=GVso17ZI8GA

Penn and Teller, Bill Bailey, Rowan Atkinson, the Pointless presenter, Sooty n Sweep, Billie Piper and Alexei Sayle were the only ones I could recognize. Surprised Charles didn't have Spike Milligan exhumed for the occasion. Hope Penn and Teller performed a decapitation trick.

See my note above!

... Billie Piper and Alexei Sayle were the only ones I could recognize.

You might have mistaken Kylie Minogue and Omid Djalili for the above two.

Martin Freeman's riotous segment is also up: https://www.youtube.com/watch?v=QpFAQUJWvIc Would have been just a tiny bit better if he had peered behind an ice-cream vendor's stall to see Ricky Gervais as David Brent (the ice cream vendor) sucking off Prince Charles, prompting Freeman to wryly comment "oh, for f**k's sake" before turning away, appalled. And then cut back to Charlie saying, "One has arrived."

Was he doing the usual Martin Freeman act?

Penn and Teller, Bill Bailey, Rowan Atkinson, the Pointless presenter, Sooty n Sweep, Billie Piper and Alexei Sayle were the only ones I could recognize. Surprised Charles didn't have Spike Milligan exhumed for the occasion. Hope Penn and Teller performed a decapitation trick.

Of course it was Sooty's 70th birthday as well.

it was Sooty's 70th birthday as well.

Pound for pound, Sooty must surely be the greatest comedian in the history of the world.

As if that were not enough, he and Harry Corbett rank in my estimation among the funniest double acts in the history of the world (regardless of weight).

Morecambe and Wise, The Two Ronnies, Laurel and Hardy, Pete and Dud and many others are contenders for that title, of course, but all of them relied on colossally complicated comedy routines compared with Sooty who only had to produce an egg from somewhere in order to give the audience their money's worth - and more besides.

The Royal Family is being pretty mean on its YouTube channel.

They need to save money.
I'd be amazed if Alexei was on it. Ain't watching cos I don't support it.

I wouldn't expect anything else, like getting the Sex Pistols to reform again for God Save The Queen.
As an anti-royalist, I refused to watch the Royal Variety Performance. This gesture will of course have a tremedous effect on the monarchy, which I expect to see dismantled in time for din-dins. My nex projects are an end to famine, no more international terrorism and the release of all political prisoners.