Self professed comedy nerd who adores all things British comedy. My favourite sitcom is dinnerladies and, OK it might be a cliche to say, but yes my favourite stand up is Stewart Lee. I have an ever growing collection of comedy videos and DVDs old and new, and I go to as many stand up gigs as I can afford to!

The list of sitcoms and sketch shows I love are far too numerous to list, but ones returned to most are:
Stewart Lee's Comedy Vehicle
Red Dwarf
The Sketch Show
Not Going Out
It's Kevin
dinnerladies
Joking Apart
Richard Herring's Leicester Square Theatre Podcast
Paul Merton: The Series
Bottom
The Young Ones
15 Storeys High
Frasier (I know it's American but that doesn't change the fact it's one of the best television programmes ever made)
Fawlty Towers
House of Fools
The Delivery Man (shamefully cancelled after one series)
Catterick
Inside No. 9
League of Gentlemen
Alan Bennett's Talking Heads (not a sitcom, but I implore anyone who's not seen them to watch, a masterclass is comic-dramatic writing and acting)
Anything that's written by Charlie Brooker
One Foot in the Grave (and anything else written by David Renwick)
Catastrophe
Man Down

There are many, many more programmes that I adore but couldn't fit them all in!

Other favourite stand ups include Bridget Christie, Daniel Kitson, Harry Hill, Sara Pascoe, Mark Thomas, Paul Merton, basically anyone who played The Comedy Store in the 80s, Frank Skinner... the list goes on and on really, far too many to name!

If I'm not at a comedy gig then I'll be enjoying some classic rock, whether it's Thin Lizzy, Led Zep, Joe Satriani, Van Halen etc 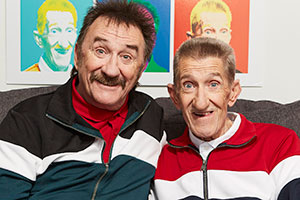 Alan Davies: As Yet Untitled