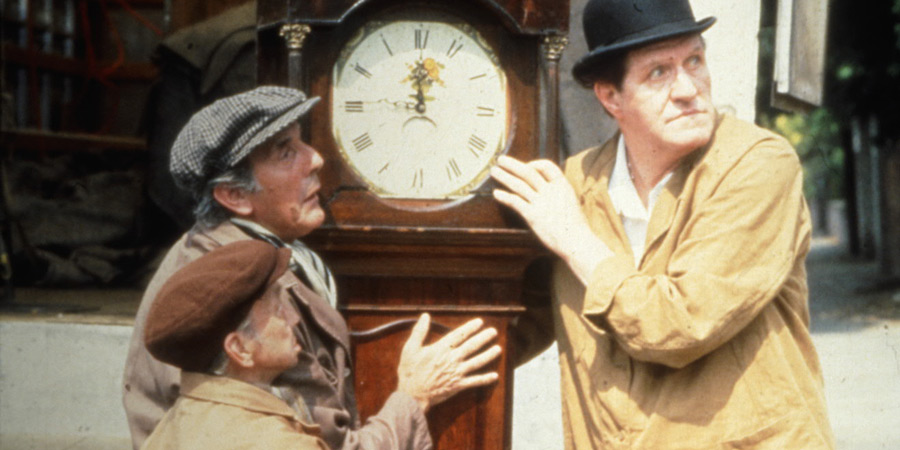 Hi, can anyone help me remember what the name of a comedy series was I used to watch in the early to mid eighties? I believe it was on ITV on a weekday at 8pm, it was about the inhabitants of a residential street and no one spoke at all! The only noises were background noise and the odd 'umm' and 'ah' from the actors. The most vivid memory I have of this show was a parrot that repeatedly screeched "I'm sorry darlin!". This was the only dialogue in the whole show. I've tried searching on Google but no joy! Please help, it's driving me nuts!

You're probably remembering the short-lived but fondly remembered sitcom, Mime is Money, about a group of street mimes who witness a mob hit and are relocated to the suburbs for their own protection. I believe it starred Dennis Waterman and the late Anita Dobson.

With Bernard Bresslaw as the parrot

The only show I remember from that time with no dialogue was Rhubarb Rhubarb.

I think you might be thinking of a series of short silent films (possibly all by Eric Sykes?). Here's a bit from Wikipedia...

The one with the parrot sounds like 'It's Your Move' with Richard Briers. Here's a link to it...

Available in this DVD set, if that's the one:

Thanks for the suggestions, everyone, but it's none of them I'm afraid. I wouldve remembered Eric Sykes if it had been a show with him in it. I seem to have a vague image of a main male character having sandy-coloured curlyish hair?? Can't beleive Googling the parrot's catchphrase yields nothing - it was the show's whole tagline!! I'm not sure if Bernard Bresslaw did the voice of the parrot as it was really screechy..I guess my childhood memories are just too vivid and I'll have to put this one to rest. Even my own parents don't remember it, yet I remember sitting round the TV gaffawing at it! I don't remember any such plot as criminals on the run, all I remember is it was set in a suburban street and went in and out of people's house - much in the way sit-coms of the seventies/eighties were always set; George and Mildred, etc. Had that same feel.

Hopefully one day they'll repeat it and I can rest!

This is a section of It's Your Move.

"Thanks for the suggestions, everyone, but it's none of them I'm afraid. I wouldve remembered Eric Sykes if it had been a show with him in it. I seem to have a vague image of a main male character having sandy-coloured curlyish hair?? Can't beleive Googling the parrot's catchphrase yields nothing - it was the show's whole tagline!!"

What you're describing does sounds like 'It's You're Move'. Eric Sykes might not have been in it, but he might have written or directed it or something. It was made in 1982 and starred Richard Briers (i.e. Tom Good in The Good Life). He is probably the one one with curlyish hair. Throughout it the parrot continually repeated a phrase such as 'Sorry, Darling.'.

I just had a look at the clip and Sykes was in it.

I just watched the clip and that's it!!! Success! Thanks to those who suggested It's Your Move initially and I poo-pooed it, I was thrown off track by it being stated it was made in 1969 - I didn't think it was that old! And I'm surprised at the famous faces in it; I must've been too young to recognise who they were at the time, I was only 10!