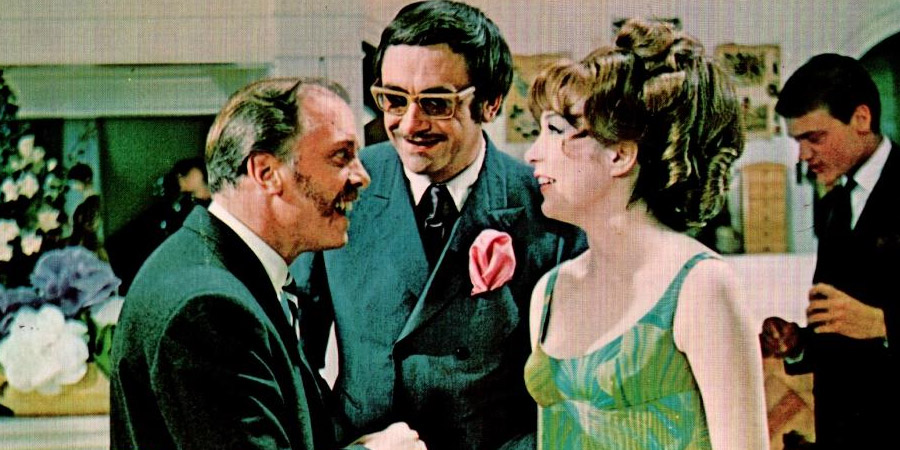 The Bliss Of Mrs. Blossom

Harriet Blossom met her husband, Robert, when doing some modelling work for his brassiere firm. A little over a decade later, they are reasonably happily married - but Harriet is discovering that the role of housewife is not entirely fulfilling; whilst music-loving Robert, although loving and kind, is not as attentive or exciting as he once was.

Whiling away her time painting, decorating the house in her own psychedelic-60s style, and sewing, it is the latter pursuit that brings her into contact with Ambrose Tuttle, an engineer at her husband's factory. When her antique Singer sewing machine breaks down, it is he - a slightly naïve dreamer with aspirations of self-improvement - who is sent to repair it, and the two quickly hit it off, not least over his sorrowful tales of orphan-hood and shyness with women.

Before Harriet knows what's happening around her, Ambrose invites himself to live secretly in the house's loft: a sprawling space amidst the rafters of the pleasant property, which he dutifully begins decorating and furnishing for permanent habitation, meticulously following the instructions in the how-to and self-improvement books to which he is already near-addicted.

As the relationship between Harriet and Ambrose grows, she finds herself happier than ever, still keeping up appearances with Robert, explaining away the occasional bump from the roof as his imagination, but enjoying her days in a far more whimsical - and vibrant - lifestyle with Tuttle. However, his disappearance has not gone unnoticed and there are a pair of dogged, and perhaps deluded, policemen investigating.

Weeks grow into months, and the months turn into years: Ambrose is still happily living in the Blossoms' loft, but using his latest book-learned acumen to secretly advise Harriet as to wise investments for the Blossom firm to make, and picking up technological ideas to pursue. By the time Robert is able to take over a global airline, the company is also nearing completion on a revolutionary new product - the world's most comfortable bra, which feels like wearing nothing at all.

The development looks set to change the world forever, and the company can now afford huge philanthropic endeavours to promote its uptake around the globe; but, Harriet and Ambrose realise, this could change their situation on an equally permanent basis.