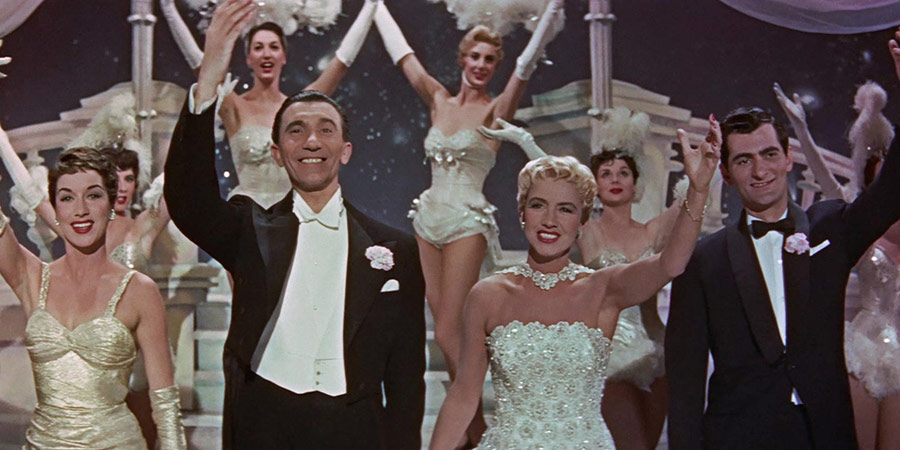 Stars In Your Eyes

Musical comedy about a theatre company trying to save their show

Radio has been eating at the profitability and viability of live theatre for years, but the quick rise in television ownership is now doing real, accelerated harm, with venues closing and performers out of work at an alarming rate.

One such negatively affected production is the touring revue Variety Follies, whose stars find themselves at a loss when the remaining dates in their run are cancelled and the company disbanded. For comic Jimmy and his partner, Sally, this latest turn of events is felt particularly keenly, and when their agent is unable to fix them up with a new position, a chance revelation from old friend David could offer a solution.

A sometime-successful composer, David's had a number of hit songs, but, encountering a less productive spell, he's hit the bottle in a big way and has become estranged from his wife, Ann, who's a hugely popular and successful singer in her own right. Unable to sell any work, he's depressed, increasingly drunk, single, living in a dingy flat, and has eaten through both his own savings and his entertainer parents' cash inheritance - all that's left is a crumbling old theatre in the London suburb of Felham, crumbling, abandoned and closed since 1940 due to bomb damage.

When Sally discovers the pitifully low price he's been offered for the site inspiration and determination hit: they will restore and run the Majestic Theatre themselves, making their own employment by putting on their own show. Both David and Jimmy take some convincing - not least due to the money that'll be required for the repairs - but Sally is more than determined enough for the three of them, and soon their plans are in motion; David, however, is still an emotional worry...