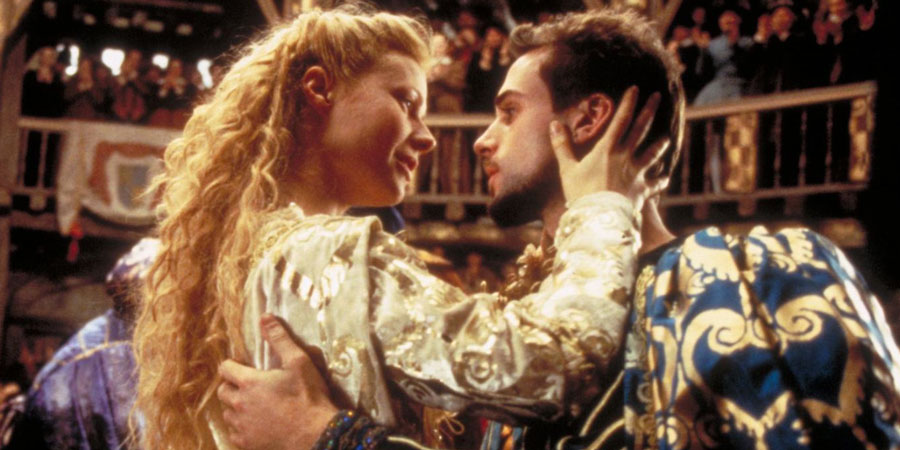 Young playwright Will Shakespeare is stuck. Owing plays to multiple London play houses, his long separation from his wife and children in Stratford leaves him uninspired, struggling to find inspiration with no muse.

Despite this, and with promises to his patrons beginning to wear thin, auditions begin for his new comedy, Romeo and Ethel, the Pirate's Daughter. A young woman, Viola, daughter of a wealthy merchant, has been enchanted by his plays at court, and longs to meet the man whose words and poetry have touched her. As women actors are considered disreputable and forbidden by the Lord Chamberlain and his censor, Master of the Revels, she disguises herself as a young man, Thomas Kent, and auditions for the play.

Shakespeare and the company are instantly won over by Kent's performance but before any more can be said 'he' runs out of the theatre. Shakespeare gives chase through London's crowded streets and down the Thames where he sees Kent entering the home of the De Lesseps family.

Aiming to find Thomas and convince him to join the players, Will meets Viola as herself, and falls in love almost at first sight. It is not long before Thomas's true identity is revealed, and the pair begin a passionate affair. Inspired by his new-found love, Will begins altering his play to tell a tragic tale of "two star-crossed lovers", Romeo and Juliet.

But the tragedy in the play mirrors that as in real life. Viola is betrothed to impoverished aristocrat Lord Wessex and he plans to wed her imminently before whisking her to his plantation in the Americas to turn around his fortune. Meanwhile at the theatre, the secret of Thomas Kent's true female identity looks set to be revealed to all, ensuring the closure of the playhouse and the possible imprisonment of the entire company.

Preparations for the premiere performance continue unabated, but neither true love nor theatre ever did run smooth.