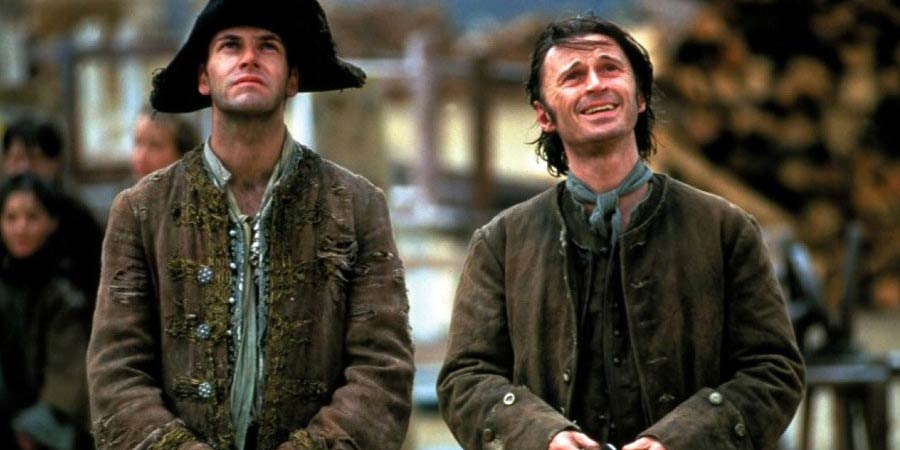 Comic adventure set in the 1740s. A gentlemen drunkard and a robber pool their talents to embark on a crime spree

London, 1748. Drunkard gentleman James Macleane's spell in a single-cell debtors' prison is brought to an abrupt and unscheduled early close when a highway robbery goes dangerously awry, smashing the door to pieces and leaving one of the culprits dying beside the damaged carriage outside.

With the Lord Chief Justice's ruthless men close behind, escaping fellow highwayman Plunkett soon returns in hope of retrieving gems swallowed by his erstwhile colleague: and Macleane has seen the exact same opportunity. But whilst working to rob the grave and destroy the corpse of the fellow criminal, the pair are caught and swiftly hauled off to Newgate for the offence.

It doesn't take long for Plunkett to begin noticing the very different manner in which James is treated, and realise his greatest opportunity yet. Uniting his criminal skill and Macleane's connections, the pair could make a formidable duo, targeting the very heart of English society and stealing some of their most valuable possessions with ease.

Eventually persuading Macleane that the plan is both worthwhile and manageable, the pair bribe their way out of Newgate and set about installing themselves in London society as a newly wealthy Captain Macleane and his manservant. An initial robbery - on the coach of the Lord Chief Justice, no less - proves highly successful, and James's educated manner earns him the nickname 'the Gentleman Highwayman', quickly becoming the talk of the town.

However, as their notoriety increases, so does the pressure on chief criminal-catcher Mr Chance to put an end to their escapades. Already a vicious, ruthless individual, his own boss, the Lord Chief Justice, is increasingly seen as too old and incapable, leading to direct intervention from the Prime Minister - and Chance sees an opportunity to rise up the ranks himself.

Meanwhile, James Macleane is busy spending most of what he and Plunkett are earning in the rat-race of keeping up appearances amongst the upper echelons of London's elite, whilst Plunkett tries to save to buy their way to a new life in the untamed lands of the Americas. And James's burgeoning infatuation with the Lord Chief Justice's niece and ward, Lady Rebecca, seems a distraction too far.

With Chance and his men closing in and fractures emerging between the criminal partners, the stakes could not be higher.