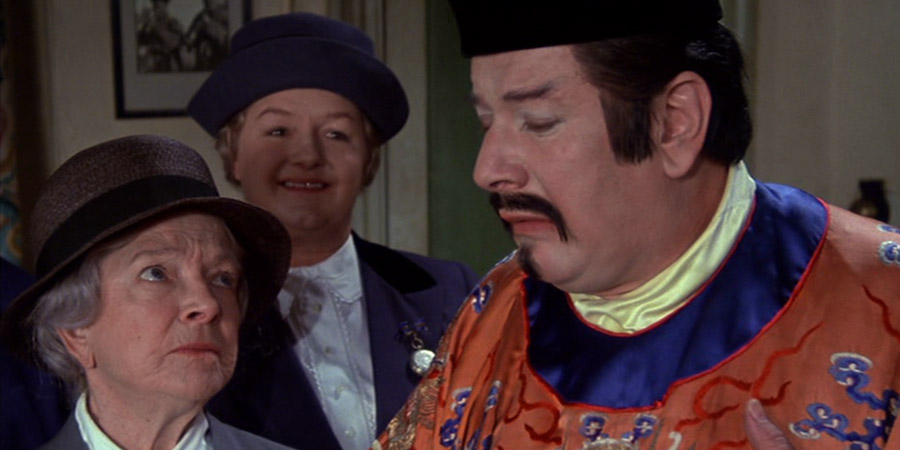 One Of Our Dinosaurs Is Missing

Disney comedy starring Derek Nimmo and Peter Ustinov. When Lord Southmere escapes from China with a secret formula, the Chinese want it back

Having stolen and sneaked out of China with the top secret 'Lotus X', Lord Southmere is captured by a group of Chinese spies immediately upon his return to London.

Seizing his opportunity whilst stuck with the kidnappers in London traffic, Southmere makes his escape, darting into the Natural History Museum and weaving about the crowds of tourists. With the Chinese hot on his heels, he darts into a gallery otherwise closed for redecoration and conceals the Lotus X-inscribed microfilm upon one of its exhibits: one of the establishment's celebrated large dinosaurs skeletons.

Falling over and knocking his head in his attempt to flee, Southmere wakes to find himself surrounded by a group of nannies - miraculously, one being his own former governess, Hetty. Confiding in her the importance of Lotus X and its location upon the creature's neck, he soon passes out again, after which the Chinese gang leader, Hnup Wan, arrives and takes him away, claiming to be an experienced doctor.

With Southmere now under the 24-hour 'protection' of the gang of Chinese spies, Hetty enlists a group of London's most trustworthy nannies on a mission to locate the film and deliver Lotus X safely to, if not Southmere, then the King. That's easier said than done, however, when there are a group of ruthless oriental spies and heavies hot on your heels!