Julia Louis-Dreyfus is to star in her first UK film, British Comedy Guide can exclusively reveal, playing a single mother fighting for the life of her daughter with Death, who has taken the form of a parrot.

The Seinfeld and Veep actor stars in Tuesday, a dark comedy about mortality and compassion currently wrapping in London. The feature debut of UK-based Croatian writer-director Daina Oniunas-Pusic, it is being produced by A24 (Ramy, Uncut Gems), BBC Film and the BFI.

Dying teenager Tuesday had hoped to use her remaining life repairing her relationship with her mother, Zora. But when Death, a size-shifting macaw who's been alive since the dawn of time comes to collect her, they form an unexpected bond.

Using her wit, Tuesday persuades her unlikely new friend to grant her more time so that she can say goodbye to her mother. But as the world slowly crumbles in Death's absence, mother and daughter must find a way to prevent the apocalypse.

Further cast details have yet to emerge, after the film's producers - Helen Gladders, Ivana Mackinnon (Slumdog Millionaire) and Oliver Roskill (Run, An Evening With Beverly Luff Linn) - launched a UK-wide search for an actor to play Tuesday in 2019.

"At it's core, Tuesday is a story about a teenage girl and her single parent mother" Oniunas-Pusic said at the time.

When Tuesday and Death meet, "she really feels like she needs to delay her passing and the way that she does that is she tells him a joke which makes Death laugh ... Tuesday is a complicated character. She's kind, good-natured and has a great sense of humour. But she's also quite cunning and stubborn and a massive risk-taker."

Mackinnon added: "I was drawn to this story because it is like nothing I've ever read in my life ... It's a very, very special film which is ultimately about the power of compassion and love to save the world."

Gladders previously worked with Oniunas-Pusic on her 2016 short film comedy about conjoined twins, Rhonna & Donna. Backed by Creative England and the BFI as part of their Funny Girls initiative with production companies Big Talk and Baby Cow, it featured Smack The Pony's Fiona Allen and fellow stand-up Tim FitzHigham, and starred twins Niamh and Nuala McGowan in the title roles.

Louis-Dreyfus, who shot in London in 2013 for the third series of HBO presidential comedy Veep, which was screened on Sky Atlantic in the UK, recently survived breast cancer. The final series was paused until she completed treatment, which informed her reaction to coronavirus.

"Oh boy, I could see this getting me" she told Variety earlier this month. "I had no sense of arrogance whatsoever about this thing. When you're face-to-face with your mortality in the way that cancer takes you there - the pandemic I found to be strangely the same."

Nevertheless, her newfound "life is short" mentality does not apply to her work life. "I'm just thinking about projects in terms of their actual meat on the bones," she told the screen industry website. "I have a pretty high bar here." 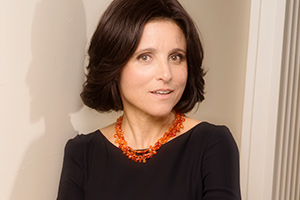