The Beano's Dennis and Gnasher are heading into cinemas for half term.

Dennis & Gnasher Unleashed! On The Big Screen will see the animated stars appearing on screens across the UK.

The 70-minute feature includes a new episode of the CBBC series, Thumb Wars, along with six episodes that previously aired on television.

Featuring the voices of Freddie Fox as Dennis and Boris Hiestand as his faithful canine companion, the pair are joined by their friends Rubi (Kelly Marie Stewart), JJ (Kathryn Drysdale), Pieface (Ryan Sampson) and his pet potato Paul as they terrorise Walter (Rasmus Hardiker) and get up to mischief and mayhem.

Having debuted in 2017 and based on the decades-old Beano comic strip favourite, more new episodes of the Beano Studios-produced show will also air on CBBC this winter.

"We're very excited that our much-loved Dennis & Gnasher Unleashed! Series 2 will be heading to cinemas across the UK and giving kids their first cinematic experience with their favourite Beano characters," said Vanessa Andreis, Director of Franchise Planning and Partnerships at Beano Studios.

"Bringing Dennis & Gnasher's adventures to the big screen will not only promise a 'blamtastic' day out for families, but also introduce a new generation to the wonders of big screen entertainment."

Tying in with school half-terms, Dennis & Gnasher Unleashed! On The Big Screen will be in cinemas in Scotland from Friday 9th October and UK-wide from October 23rd. 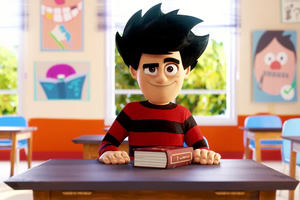