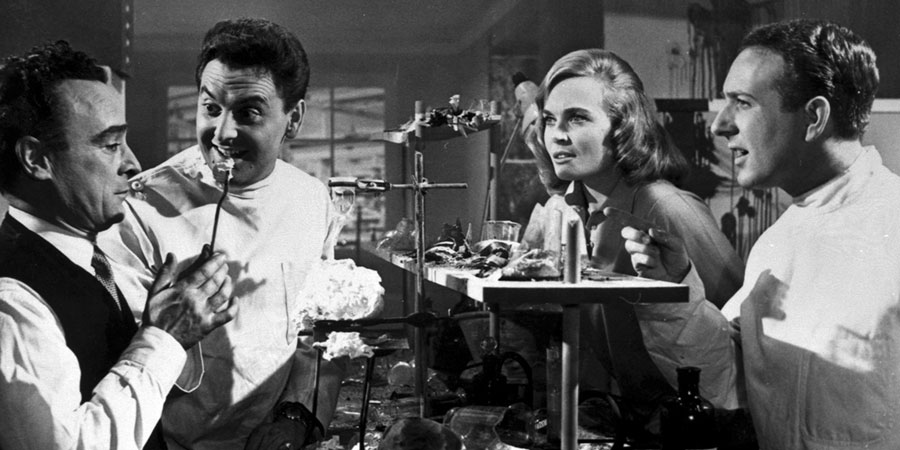 Dentist On The Job

Comedy sequel. Colonel Proudfoot is looking for a dentist to endorse his new toothpaste and his cousin may have just the men

Colonel J. J. Proudfoot, the Managing Director of Proudfoot Industries, is bursting with fury when his latest product, a toothpaste called Dreem, fails to attract the attention of the public. Everyone in the organisation comes in for a taste of J. J.'s tongue and the brunt of his temper is vented on his Advertising Manager, Mr. Duff.

To save his skin, Duff suggests that the firm should engage a dentist to endorse the toothpaste. A tricky ask, as any dentist endorsing a commercial product in such a scheme would be liable to be struck off the Register. But J. J. thinks that Duff's idea is a good one and he knows just the man who will help him - his cousin, the Dean of King Alfred's Dental College.

Identifying his two worst ever students for the job - the newly (but only just) qualified David Cookson and Brian Dexter - the Dean is quick to despatch them to the Dreem factory before they can be let loose on an unprepared general public; and, perhaps all too true to form, the pair quickly sign up to the £1,500-per annum salary - not realising quite what their job entails!

Soon realising that they are to be marketing stooges rather than in-house dental workers for the factory's staff, Cookson and Dexter seem to be stuck; and with one of Proudfoot's executives, Macreedy, having taken a particular dislike to them, it's an increasingly uncomfortable situation.

Fortunately, there is one friendly face: beautiful blonde Jill, who was to be the star of the company's new advertising campaign, who has also fallen foul of Macreedy's duplicitous nature. And luckily, whilst he may be a haphazard dentist, Dexter has proved to be a pharmacological whizz - a workable plan to save their skins could yet be in the offing.