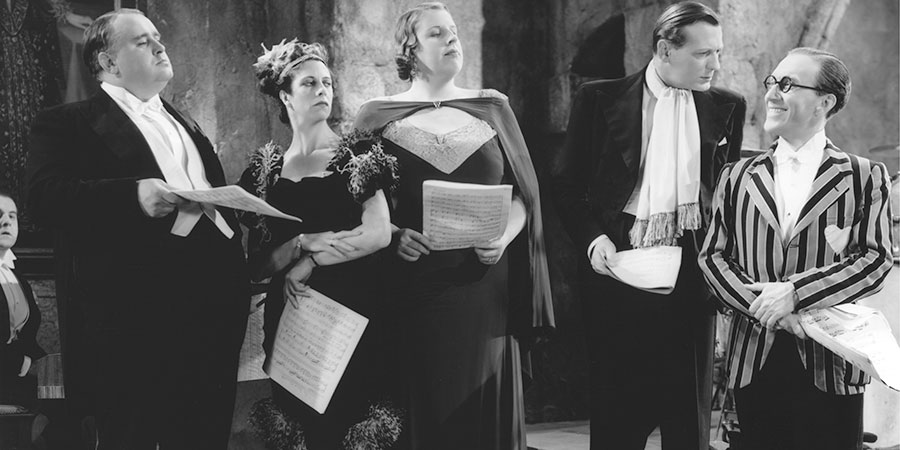 Wartime film based on the popular BBC radio comedy series

Kept waiting for an audition at the BBC's Broadcasting House for months, Arthur Askey and Richard 'Stinker' Murdoch have taken up residence in a little-used top-floor rehearsal room, using the building's rooftop to keep chickens, birds and a goat - not to mention a place to exercise and hang their washing.

When discovered by the joyless head of programming, they are promptly evicted from their comfy arrangement and manage to make their way to the country, where they find something approaching their rural idyll in a large old castle, available to let for a very reasonable sum.

However, on only their first night the duo are disturbed in their bed by a threatening, ghostly presence. Making a quick escape with the spectre hot on their heels, they arrive at a quiet but well-staffed night club, where they recount the tale to the assembled band - under direction of Jack Hylton, they too have been unable to secure a BBC audition!

Conversing with the locals, it's not long before Arthur and Dickie realise they've been tricked by an all-too-human inhabitant rather than a real ghost, and head back to the castle to have their revenge and claim the property they're paying for.

Meanwhile, the ghost - really the building's elderly caretaker - is not quite alone. He's been helping a small group set up and transmit their own pirate, "commercial" television channel from a makeshift studio in the castle: although what he doesn't realise is that the group are in fact spies communicating top-secret British war plans to their European masters.

Searching the castle for the caretaker, Arthur, Stinker, Hylton and co. very quickly discover the studio and realise that they can make their own programmes: if they can't get on the BBC, they'll start their own channel!

Gathering together the rest of Jack Hylton's band, honing their own material, and roping in some other acts, the group prepare to go on the air for the first time, but with forces of fascism, the BBC, and the police all on the hunt it's by no means assured that their 'Band Waggon' will make it to air!