Cartoonist moving into comedy writing. My latest sitcom has been optioned by a production company. A broadcaster's shown interest, and I've been commissioned to write a second episode. Could still come to nothing, of course. Latest update - it's going ahead! Simon Callow in lead role, filming in February. Now to knuckle down to writing a third episode. And rewriting, and changing the order of the episodes, and rippling though (new phrase!) the themes, and rewriting, and cutting entire scenes, and rewriting...
Filming finished! I was there for the week-long Brighton shoot, great fun. Now for post-production...
The Rebel starts on July 20th at 10 p.m. on Gold, and the subsequent two weeks.
Well, it happened. Overall pretty encouraging reviews, reasonable viewing figures. Fingers crossed for a second series!
Second series now in pre-production, to be broadcast in the run up to Christmas!
Rebel 2 (six episodes) starts on Nov 8th at 10 p.m. on Gold.
No third series due to disappointing viewing figures. Fun while it lasted!
Now trying to come up with new ideas... 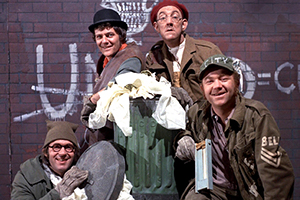