This opportunity is now closed. Reading is underway. The winner will be announced Wednesday 16th March 2022. 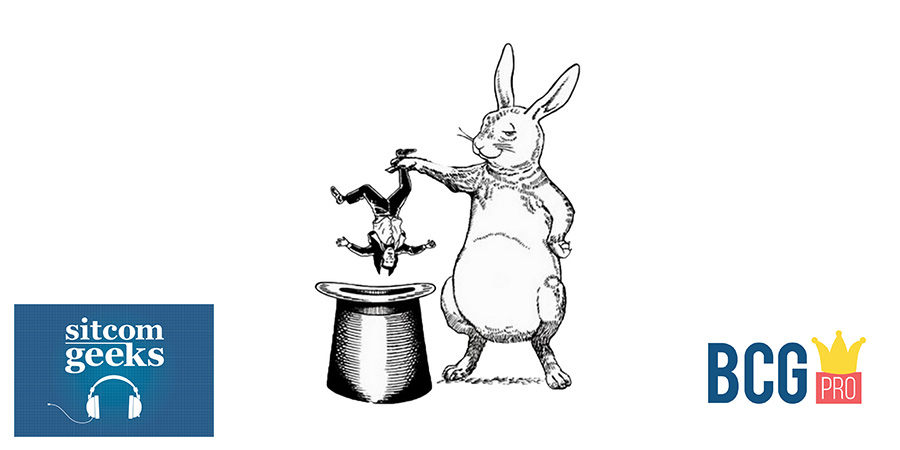 Hello and welcome to The Hat Trick Sitcom Script Competition produced in association with Sitcom Geeks and BCG Pro.

This is a competition for newer and less experienced writers. Both represented and non-represented writers are welcome to submit a script, however those who have a long-form TV comedy broadcast credit (a 20-minute or longer TV production on which they were credited as a main writer) are not eligible to take part. Writers who have submitted jokes or sketches to a TV show, but didn't write the majority of the episode's script, are still eligible to enter.

To enter you should submit a single, half-hour TV script.

We are not looking for...

Think about the kinds of sitcom Hat Trick makes: Drop The Dead Donkey, Father Ted, The Kumars, Derry Girls, Outnumbered. Subject matter can be challenging but it's the characters that are most important.

Recent examples of shows that have the kind of tone Hat Trick are looking for include Ghosts, Friday Night Dinner and Stath Lets Flats.

The competition is now open (it launched 1st December). It closes 5th January 2022. A shortlist of the top 20 scripts will be selected and the winner will be announced on Wednesday 16 March. The winner receives a £1,000 prize from Hat Trick, and a development meeting.

Your script should be written in standard screenplay format (see the BBC Writersroom example), and saved in PDF or Word format. It should have the show's title on it and each page should be numbered, but to allow for 'blind' judging do NOT include any personally identifiable details, such as your name or contact details, on the script. BCG Pro's system will keep track of these separately.

The full terms and conditions below explain more. If you have any questions, do get in touch.

The Hat Trick Sitcom Script Competition, produced in association with Sitcom Geeks and BCG Pro, has been created to discover and develop new comedy writers.

This is a competition expressly designed with newer and less experienced writers in mind. Both represented and non-represented writers are welcome to submit a script, however those who have a long-form TV comedy broadcast credit (a 20-minute or longer TV production on which they were credited as a main writer) are not eligible to take part. Writers who have submitted jokes or sketches to a TV show, but didn't write the majority of the episode's script, are still eligible to enter. If you have any questions about your eligibility, do get in contact with BCG Pro.

This competition is open to those living in the UK and Ireland only.

Scripts written by more than one writer (e.g. a writing partnership or writing team) are accepted, however each individual can enter only once, either solo or as part of a team.

Entrants should note that this competition is looking for new narrative TV comedy shows that can be watched by viewers across all age groups ("co-viewed"). Your entry should be a self-contained stand-alone episode. Hat Trick are looking for "family shows in the broadest sense - as in, a group of people acting together. It could be about a family, or a group of friends, or a group of people in a workplace". Shows that include characters from multiple generations are encouraged.

This competition is not looking for: radio scripts; shows with an emphasis on comedy drama; formats with strong narrative arc; "dark" comedy; or meta-comedy.

To enter the competition, the entrant should submit a script of a single television situation comedy episode. It should fit the profile of a half hour programme, and thus will likely be 24 to 35 pages long.

The script must be fully available and not under any option deal/agreement with any studio, network, production company, or any other third party.

Entrants are welcome to a submit a script that has been entered into a previous competition, but are encouraged to have sought professional feedback on the work and made significant revisions before submitting it to this competition.

All entries must be the original work of the entrant and must not infringe the rights of any other party.

Scripts should be written in English and formatted in a standard screenplay format. It's recommended you follow the BBC Writersroom TV screenplay format (https://downloads.bbc.co.uk/writersroom/scripts/screenplaytv.pdf). Scripts written in a notably different format (e.g. a radio script format) will not be read.

The initial stage of the competition will see the readers (judges) process scripts blind of any personal details to ensure maximum transparency and fairness. Accordingly the script itself should NOT include identifying personal details such as (but not limited to) the entrant's name, email address or phone number.

The script's title should appear on the opening page.

Pages should be numbered.

When and how to enter

The competition entry form will be open on the BCG Pro website (www.comedy.co.uk/pro) from 1st December 2021 until 23:59 GMT on 5th January 2022. No entries will be accepted after this time. Entrants are advised NOT to wait until the evening of 5th January to attempt entry as it allows no leeway for troubleshooting if you are unable to use the system.

To enter, the entrant should upload the script - devoid of any personal details - via the dedicated entry form, completing your personal details (name(s) and email address(es)) in the relevant fields. The details and the uploaded script will be linked by an anonymous, unique identifier known only to BCG Pro's internal systems until judging has completed.

Scripts may be submitted in Adobe PDF (.pdf) or Microsoft Word (.doc, .docx) formats only. The BCG Pro team can offer advice on saving a file in one of these formats if help is required.

Once a script has been submitted, the entrant has 48 hours to check and submit new drafts, after which time the entry will be locked, and no further revisions accepted. It will be this script that the judging team will evaluate.

A successful entry of a script is confirmed by an on-screen notification and a download link of your script file being visible on the page. The entrant can also opt to receive a confirmation email.

The organisers aim for both a shortlist of scripts and the selected winner to be announced on Wednesday 16th March 2022, however this date may change subject to the volume of scripts received.

The personal details connected to the shortlisted scripts will be shared with Sitcom Geeks and Hat Trick Productions to facilitate communication. British Comedy Guide's privacy policy outlines how personal details are stored and used.

The Sitcom Geeks team aim to offer feedback to the top 10 scripts in the shortlist but cannot guarantee this and make no such offer to unlisted entries.

The winning script will receive £1,000 (one thousand pounds Sterling) prize money from Hat Trick Productions. In the case of a writing partnership or team, the prize money will be paid to the British Comedy Guide account holder who entered the script into the competition, and the onus will be on that individual to share the money with any other relevant parties in their team.

Hat Trick Productions also intend (but cannot undertake) to offer the writer(s) of the winning script a meeting with their development team. This may take place by telephone, video call or in person.

All entrants retain the rights to their script. Hat Trick Productions shall be granted an exclusive 2 month period, from the announcement of the winner, to make an offer to option the winning script. The terms for such option to be agreed in good faith at that time and shall be in addition to the prize money. It is within the winner's rights to decline this offer.

Hat Trick Productions will offer no alternative prize, and the judges reserve the right not to award a cash prize if, in their sole opinion, there is no submission of sufficient merit.

By uploading a script, entrants are confirming they agree to these competition terms and conditions in full.

If an entrant is submitting on behalf of a writing partnership or team, before they submit they must confirm with all those involved that they agree for the script to be entered into the competition, and that they too acknowledge and agree to these terms and conditions.

The Promoters - Hat Trick Productions, Sitcom Geeks and BCG Pro (British Comedy Guide) - are not responsible for lost, late, incomplete, invalid, unintelligible or misdirected submissions, which will be disqualified.

The entrant hereby warrants and represents that they are the present, exclusive and sole owner of all right, title and interest in relation to their submission and has the unconditional power and right to present the submission to the Promoters. This includes that the submission has not been produced, sold or optioned to any third party; and the submission shall not infringe any law or regulation or third party right, including (but not limited to) the law of copyright, defamation or trademarks. Entrants shall indemnify and hold the Promoters harmless from and against all damages and liabilities suffered or incurred in connection with, resulting from or arising out of a breach by the entrant of these terms and conditions.

By entering this competition, entrants acknowledge and agree that Hat Trick Productions may already be involved in any number of projects bearing similarity to ideas that may be reflected in entries to this contest. The Promoters cannot undertake to compensate entrants if material similar to that submitted, received coincidentally from another source, is subsequently commissioned or produced.

The entrant shall not discuss any information concerning the Promotors or the competition or their participation in it, with any other person or company, whether by means of social media postings or otherwise, at any time without the prior written consent of the Promotors.

Employees (and their immediate families and household members) of the Promoters are not eligible to participate in the competition.

The Promotors' decision shall be final in all matters.