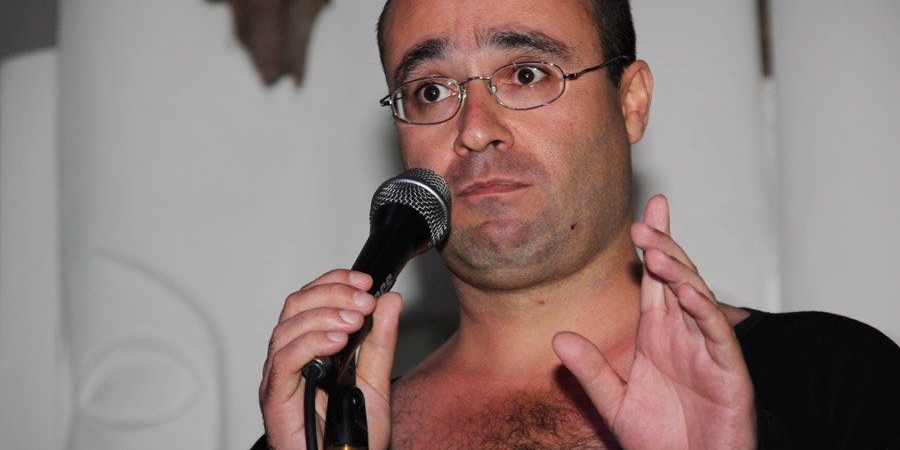 Hi Michael. Who are you and what do you do in comedy?

My name is Michael Monkhouse. Michele Convento if you're on Googletranslate. Or El Monkhouse if you're Spanish, but that's taking the mick out of my name.
Write, Stand-upper, failed Spice Girl... My career spans over three jokes. I enjoy writing sketches for performance as one half of Mikeandfrank and inclusion on this page's weekly skit comp, and I've been performing stand-up at Open Mic nights for over ten years. I am still total crap.

My first experience was a stand-up stint at Footlights, which is in Oxbridge but you can't find it on Googlemaps. I was almost, but not quite, total crap. I got a grand total of one laugh (I counted) and that was by mistake. I was going down like the name of Jack Dee's sitcom so I panicked and started to slur the lines together. When I went from 'I'm shy but I have a bit to drink' to 'Then I'm fucking annoying too' they thought it was a rug-pull and I got my first and last laugh. I followed this with a cute set for student TV which went well but the audience was full of project members so they were Just Being Nice. Then I did an open audition for Cambridge Junction and it was so beyond awful I gave up for years.

Definitely The Young Ones. I'd always enjoyed mature comedy - my first word was 'willy' - but honestly, a lot of what I was watching was over my heads. I caught the first ever episode of The Young Ones and it was love at first sight. I still adore it and can't believe the middle-aged mediocrity of Bottom regularly trumps it in the polls. Or that it's not butter.

Because I'm hard working, committed to the craft and funnier than Sylvia Plath, Ingmar Bergman and Joy Division. I have to be honest and say that my ambitions have mellowed with age. I used to be an arrogant little fart. Now I'm an arrogant big fart. But these days I'm mainly into the fun and excitement of sharing ideas and hearing laughter. Yes, I got a laugh once.

In the words of William Shakespeare, fuck it. There'll always be someone who likes what you do and someone who hates it. I've had exactly the same material get hysterical applause and stony, stoned silence; I've had exactly the same organiser say 'We want you in every show' and then ban me for life. There's no point agonising over every failure or getting complacent over every success: just keep at it. Bill Hicks summed it up, albeit in a different context: 'I've had good and bad relationships, I'm not giving up pussy.'
PS This attitude has got me banned from almost every show in town, including ''''''''''Open'''''''''' Mic. Includinger the Open Mic I jointly set up myself. Result!

On TV, on a stand-up stage or in Melanie C's kitchen. But I'll probably be sitting in my underpants writing crap on a webpage. Nothing changes out here - you just get a bit closer to death.

My major hobby is comedy, but I also like reading. When a guy says 'I like reading in my free time', it means 'I do sod all'. My other passion is the Beatles, which I can prove by the following anecdote:
I was buying a bunch of Beatles CDs and the shop assistant says, 'Why don't you sign up to our mailing list?' - I said, 'Sure.' - 'Are you a Beatlemaniac?' - 'Yeah.' - 'Are you an obsessive, totally OTT Beatlemaniac?' - 'Yeah, I guess so.' - 'Are you one of those deranged, disturbed and disturbing, deluded Beatlemaniacs who'll buy any total and utter fucking shit just as long as there is some connection, no matter how tenuous, to the Beatles?' - 'Yeah! How did you know?' She pointed at the Ringo Christmas album and laughed.
So there you go. My second ever laugh.

An end to suffering, war and One Direction... Seriously, I think we should all give a little money to Africa. People are cynical but I believe if we all gave a little money to Africa, we could finally put an end to Comic fucking Relief.
I used to have a joke: 'Every day I pray that food will reach Africa. So all you c--ts at FAO will be out of a job.' Did I mention I got banned?