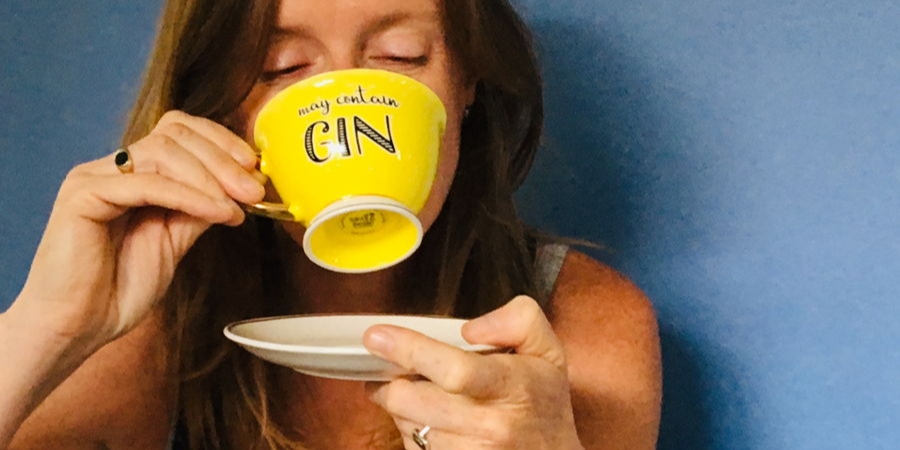 Hi Karen. Who are you and what do you do in comedy?

Like most here, I hate talking about myself. Sounds so general and dull. Not one for bigging myself up, but I've had a fair crack here. I'm brilliant. There, think I've got over my inferiority complex. I've been an ideas person since dot, very imaginative via drawing, acting and writing. I produce my own work too, (see below) being SO bored with the dull female roles I was seen for or offered. Submissive, second fiddle, desperate, weak, or, flip a coin, a total bitch. Not much in between. So, I write the in between.

After stand up at college, and a drama degree, I travelled, bummed around, grew up a bit, then turned up at the BBC for two years, working as a Comedy Researcher. Still craving the insecure, financially strained life of an artist, actor, comic, whatever form I'm filling in, I've been self-employed; writing, acting and doing role-play work ever since.

More about me and my ego on my website. Thanks for reading.

1993 - doing stand up via Middlesex Uni comedy course. Everyone said, I would be great at it. I enjoyed it, but I like acting and working with, and off, other people. Stand up is a certain madness that I'm not sure I want to throw all my heart at.
It followed with sketches, and comedy was the first and most natural thing I did. Still is really and it's great fun to perform comedy.

Worked with Charlie Hanson productions, Ruby Wax, and the production panel - all in the PA side of things. So I was frustrated with that but learnt things along with way. Then, I'm so old, it's hard to precis it all here. Most of my work is with Motormouse Productions and I've created works for the festivals, UK tours, play publications and grabbed a few commissions on route.

Victoria Wood is the reason I do what I do. She influenced so much of my earlier writing and performing style. She is still, I think, under-rated as a performer, writer and lyricist. I just read her plays recently and her talent was unlimited. So sad she's gone.

Others, I love Pinter, Orton, Anthony Neilson, Anna Jordan, Sue Townsend.
More, plenty but they come to mind easily. I love the darkness, the wit, the surreal nature of their work.

I've been creating 'interesting' characters for women for ages, not just since MeToo and all the diversity game changers of late. I always felt girls/women got less pickings from education and throughout their careers. I got sick of sitting in writing meetings as the only woman present, not listened to, spoken over and all that. I got fed up with all the crap insecure, depressed and desperate female roles. So boring!!! Funny, leading, intelligent female roles are a lot more scarce. We really need to change that. Women are so interesting and the middle years, often skipped on television, are some of the richest for comedy and insight. So, that's my soap box direction.

And, I'm rather nice to work with. I am collaborative. I get the actor's perspective, I write with an actor's instinct. I write the sounds and rhythm of speeches. I capture real human instincts, frailties and quirks and the things we don't always think are funny. But we are a peculiar species, very complicated and will never run out of humour to address all of this.

I love a laugh, I'm not pretentious, I can't be doing with hanging around and talking fluff. I want to get on with it and I like working with like-minded people and people who trust the script to work, not radically change it.

Lastly, I've got a mix of career and life experience that really weights my work. It always comes from a truthful place. Comedy doesn't work when it's phoney.

Think that's it. Try me out.

For a comedy set.
Second best joke, put first.
Your best joke, last and
any old shit in between.

On a tennis court, on a motorbike, in the gym, cycling, photography, loads of stuff. I rarely sit still.

God's Waiting Room made for TV.