F**king Hell! C**tgtasulazioningd to Lazzard for shingling. Your prize is to have won so PM me with a new slut please. Meanwhilst...
Lazzard - 3
Gappy - 2
Udderf**kt - 1

Certainly continually giving and recording votes to people who've not entered sets the bar comfortably low when it comes to delineating acceptable jokes; very thoughtful for new-comers to the game. 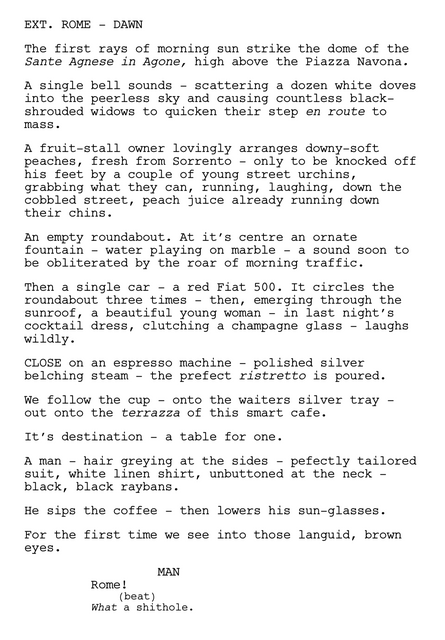 Recently there was the earthquake in Abruzzo. And the Italians sent up Berlusconi. I thought, Haven't they suffered enough already?
Now we criticise Berlusconi but in a sense we shouldn't. For one thing, he's here: someone's obviously voting for him. For another, he's always smiling (you'd smile like that if you had a girlfriend a quarter your age). But mostly, he's right for Italy because he represents a classic type of Italian male. Examples:
The news is depressing? His answer: Don't read the newspapers then. Compare the average Italian news report: two days on the earthquake, twenty years on Valeria Marini.
Or: There's violence on the streets. His answer: Give us a smile. Compare the typical Italian on Friday: It's been a tough week, I've got no money, my house's falling apart... But as long as I can share a plate of pasta with my mates, hey...
Or: Italy's suffering from the worst recession since the thirties. His answer: Can't be that bad. Compare house prices: they doubled, doubled again, quadrupled, millionupled...
Then we read that as of next year... They might drop by a mighty zero point zero three per cent. And the Italians rejoice.
So maybe we should leave Berlusconi alone. Nobody could be more quintessentially Italian. And that's exactly what we had: A nobody.

ONEIUS: I don't know, what hoe?

TWOIUS: I can't even see any hoes, Marcellus?

MARCELLUS: It's a native greeting I'm trying out.

ONEIUS: Well, don't. We may be stationed in Britain, but we're still Romans, and don't you forget it.

TWOIUS: Better. Now, what is it you wanted to see us about - I hope it wasn't just to show off your linguistic prowess.

MARCELLUS: No, it's about that little spring out west, Aqua Sulis. I wanted to turn it in to a bath.

TWOIUS: Well, knock yourself out, have good soak, but I don't see how the Tax Commission needs to be approached.

MARCELLUS: No, you misunderstand. I want to build on it and turn it into a giant bath - with columns, and pipes and changing rooms and stuff.

ONEIUS: You want a bathing facility as big as a city

MARCELLUS: Yep. And I shall call it...Bath.

TWOIUS: A bath the size of a city? Are you mental? What will you do next, burn down Colchester and call it a toaster?

MARCELLUS: Well, cleanliness is next to godliness.

TWOIUS: They're all quite different. You'll know this, as a Roman.

MARCELLUS: Well, all the ones not connected to death, and monsters and stuff like that. Which is most of them. Alright, forget the gods. But washing is important.

TWOIUS: We know that. So's eating well, but I'm not planning to grow a cabbage the size of Dundee.

MARCELLUS: Yeah, alright, but baths are important for intellectual development. Think of all the great ideas that have come to man in the bath. There's Archimedes, and...

TWOIUS: Marcellus, considering the enormous sum of money you're hoping we'll grant you for this gargantuan washbasin, would you mind telling us which lucky person is going to use it?

MARCELLUS: Oh! I can see why you were sceptical now. It's not for one person, hundreds of men could use it at once.

MARCELLUS: The men would stand naked in a hot steam room, then plunge nude into a cleansing spa bath, and then -

MARCELLUS: Then they'd skip in the buff into a refreshing cold pool with the other men.

ONEIUS: And are there any women in the bath?

MARCELLUS: No, of course not.

ONEIUS: I suppose next all the big old men would frolic about in the frolicking parlour, in the altogether?

TWOIUS: Tackle swinging gaily like the hair of the hydra?

MARCELLUS: No, not really, but -

ONEIUS: It seems to me, that despite all the manly talk of hoes at the start, a whole conurbation created just for damp naked men sounds a bit gay.

TWOIUS: If BC stands for "buttocks clothed", then I'm happy where I am.

MARCELLUS: Do I take it, then, that you are rejecting my proposal?

ONEIUS: Your proposal to build Cockopolis and run around it all day in the nuddy? Yes.

MARCELLUS: Then I shall bid you good day! Which is local for vale!

TWOIUS: A Caius Argentis, I believe.

ONEIUS: Right, get him in here.

ONEIUS: That's more like it. What's your plan, Caius?

CAIUS: I want to turn the Lake District into a vast massage parlour and leather bar.

A HORSE DRAWN WOODEN CAGE IS BEING PULLED THOUGH THE STREETS OF ANCIENT ROME. IN IT IS A ROMAN CENTURIAN 'MAXIMUS' AN OLD ROMEN SOLDIER 'FELIX' AND A BLUE PAINTED BRITON 'COLINUS'.

COLINUS: (STANDING, EXCITEDLY HOLDING THE WOODEN BARS) Wow! Look at that house...it has another house on top of it!

MAXIMUS: (SEATED) So you keep saying, just wait until we get into central Rome.

COLINUS: Well it can't be any better than this. Look there!

MAXIMUS: Don't tell me, another house on top of a house?

COLINUS: No, a house on top of a house...with a huge pair of brightly painted breasts hanging from the top house.

MAXIMUS: That would be a brothel.

FELIX: (LAYING ON HIS BACK) That my blue faced friend is where your mother was born.

COLINUS: Really? Can we stop? I know so little about my mother.

MAXIMUS: Maybe after we have been to see the Lions.

COLINUS: I am so excited to see the Lions,

FELIX: To see the Lions?

FELIX: (JUMPIMG UP) I don't have to take orders from you Maximus. We are all prisoners on the same journey,
to the same end.
MAXIMUS: Look Colinus, over there a house with two houses on top.

MAXIMUS: (TO FELIX) Leave him alone Felix. We have travelled all the way from Britain together and I have use of him.

FELIX: And you have not stopped moaning since I got in at Gaul. Well, if you have a plan you had better get a move on, the Lions are expecting us for dinner tomorrow.

COLINUS: Lions, I can't wait to meet the Lions.

FELIX: And I am sure they are licking their lips in anticipation of meeting you. What is your name my friend.

COLINUS: My roman name is Colinus.

FELIX: Let me guess was your Britannic name, Colin?

COLINUS: What an age we live in. Buildings that reach well above my head height and shabby old soldiers who can read my mind. Do you know what Maximus means?

FELIX: On the contrary Maximus.

COLINUS: It means 'The greatest'

FELIX: Does it? That's great isn't it. But did you know his Family name is Frugi, which means bowl of fruits. So, he is...'the greatest bowl of fruits'.

MAXIMUS: And Felix means 'Lucky'. Which is funny because he doesn't look lucky!

FELIX: You were pretty lucky, surviving the decimation of the Ninth. I was there and I saw you drop your sword and helmet and run for the hills.

MAXIMUS: ...I had a touch of dysentery. I had to get to the latrines pretty quick. Anyway, I remember someone who looked a bit like you running past me!

FELIX: As soon as you set off everyone stood dumfounded. No one had ever seen that before. So I thought, that's lucky, shouted "I'll get him!" and took off after you.

MAXIMUS: Where did they catch you?

FELIX: Gaul, I was making my way back to Rome, to get to the Wife and Kids, and got recognised in a bar.

MAXIMAS: Going back to the Wife and kids was never an option.

FELIX: I wasn't going to stop with them, they owe me money. What about you?

MAXIMUS: The kid found me hiding in his sewage pit and took me in. Then the soldiers found me when they came to look for the Ninth.

FELIX: And they took Colinus for sheltering you?

MAXIMUS: No, they weren't interested in him but he insisted on coming with me to see Rome.

FELIX: Wow he is as sharp as overcooked Asparagus. So what is your plan?

COLINUS: What does Colin mean?

FELIX: It means your parents had no imagination.

COLINUS: I am learning so much about my parents.

FELIX: I can help, what do you need me to do?

MAXIMUS: Well, I will need someone to lead the cheering and clapping.

MAXIMUS: Tomorrow in the Coliseum in front of thousands of witnesses, we will perform a Bonafede miracle. The crowd will, once they are encouraged...

FELIX: Encouraged? That's me! I can do encouraged!

MAXIMUS: Once they are encouraged, they will demand the consul pardons us. He will have no choice.

FELIX: By the Gods it might work. What is this miracle?

FELIX: He does what?

COLINUS: What's that animal painted on all the walls?

MAXIMUS: He catches the Lions by the mouth, and then forces their mouths open until the jaw breaks. Killing the beast immediately.

FELIX: And he has actually done this?

COLINUS: That one there, eating a child.

MAXIMUS: That is not a child. It is a gladiator being eaten by a Lion.

FELIX: Maximus, you do know Lions aren't indigenous to Britannia? How big were the Lions you killed Colinus?

COLINUS: Well the tabby's were not very big, but the ginger ones were nearly up to my knees.

FELIX: Back to plan A for me then. Keep just ahead of you two until you are picked off. Then hope the only Lion left hungry is older than me. Then try and keep out of his reach until he has a heart attack, or the crowd get bored. And just hope the bastards don't throw a cheetah on,
.

It will have to be Lazzard's Fast Show bathos for me.

Torn beaten Gappy & Playfull's two Life of Brian-esque outings. But, in the end Gappy gets it for the higher gag count.

I liked Lazzard's Stylish set up and who doesn't like a bit of Berlusconi bashing. But i go Gappy!

All good. It's between Michael's, as it's topical and Playfull because I like the whimsy of "house on top" and "blue faced friend " . Playfull pips it.