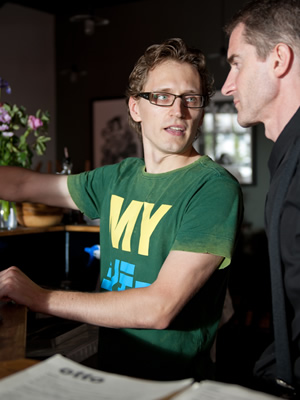 What is it like to have a sketch you made watched by millions of people? Lauris Beinerts can help us answer that question as, in just 2 months, his video 'The Expert' (below) - a satire on office meetings - has been viewed by well over 6 million people.

Hi Lauris. Could we start by asking you to give us a little background on yourself?

I have been living in London for 3 and a half years now. Initially I freelanced for advertising production houses, but for some time now I have been working full time for Moxie Pictures. My background before I moved to London is not related to film or the media though - I graduated with a BSc in Economics and worked as a Financial Consultant in Nokia travelling around several countries in Europe, Middle East and finally in China, which is where I shot my first short film over a couple of weekends.

How did the idea to film 'The Expert' come about?

A year ago I saw a Russian short film Professionals which I really loved. I researched it a bit and found out that it was based on a short story by a Russian blogger Alexey Berezin, and at that point it was already the third version. I found the story itself pure genius, so I got in touch with Alexey and he gave me the permission to make an English version. Later Alexey told me that he wrote the story in two hours, straight after he had had a very similar meeting himself. I find it simply amazing that one can just sit down and write such a tight and perfect story like that!

Let's talk about the specifics of filming it...

I worked on the script for about a month. The first version was actually for stage. I've realised that a stage performance is a good way to see how the material works, to feel audience reaction; especially for comedies. It passed the stage test brilliantly, so I reworked the script for screen and we shot it one day last summer. 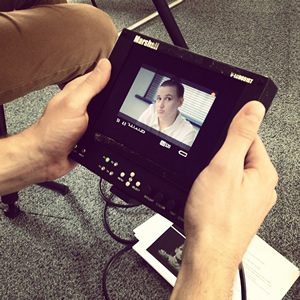 I spent a lot of time rehearsing with the actors and working on the shot list. Given that it is 5 characters that basically play out 1 single long scene, I wanted the improvisation to come in rehearsals, so that on set the timing was already worked out.

Also, given the number of characters and thus angles, we had to basically shoot 11 set-ups that run for almost the whole scene (9 pages of script) plus some separate shots. To manage that in what ended up not even a full shooting day, I more or less had the script transformed into an editing plan before the shoot. It was a bit of a mental exercise!

When you uploaded it to YouTube, did you do anything to publicise it?

After uploading it, I sent it only to the cast and crew without publishing it anywhere else, not even to my friends. Alexey posted it on his blog, and this is where the initial views came from, the first thousand or so being from Russia. But then a day later it just exploded with views pouring in from all over the world. In all honesty, I don't really know how the video spread out, we didn't do anything to advertise it.

It was funny when the producer and editor Connor, who is originally from America, told me some of his friends from back home sent him the link asking if this is something he had done, since they noticed his name in the credits!

Nice. So at what point did you realise you had a hit on your hands?

When I uploaded the sketch, my quiet hope was that it will be seen at least by someone outside of my immediate friends network. So when it hit 10k, I was over the moon. But the next day it went over 100k and at that point it all just became surreal. I guess the most vivid moment was when, in the middle of a party celebrating my and my wife's birthdays, everyone started to cheer because the video had just hit 200k mark. 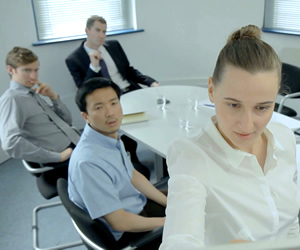 In all honesty - no. As I said, at some point it just becomes surreal.

Can you put your finger on why the sketch does seem to have done so well?

I think the story is extremely relatable. The most popular comment posted is "this is about me". And I believe that the actors did a marvellous job and delivered this story in a very engaging way.

At first I tried to do that, but it is just impossible to keep up with everything. But I am still trying to keep up at least with part of it, and I have to say I am humbled by the lovely community. At this point there are 37 different subtitles available, translated by the community (well, the Russian was done by Alexey and the English and Latvian by me), and new ones are still coming in! And another group went on a mission to solve the problem, with D. Scott Williamson actually coming up with a great solution proposal video

So have you received any work offers off the back of showcasing what you can do Lauris?

I have two scripts for short films that I am currently looking to finance, and while I have not yet secured the financing, the recognition I got from The Expert has opened several doors, and I am hoping to soon be working on both the scripts!

What are you going to do next? No pressure, but it's going to be hard to follow up with another hit?

Indeed! It was a depressed thought that the reaction to whatever I publish next will be "this is not as good as The Expert". But there is nothing what I can do about it other than aim higher, so the next target is 100 million views :-)