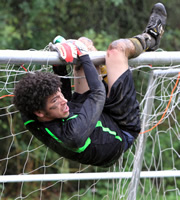 Ollie's dropped from his five-a-side football team in favour of a younger player, and takes the situation particularly badly. Meanwhile, Liz has a new boyfriend.
Preview clips

Ollie has been booted out of his Saturday League football team for being too old but has found another local team willing to take him on. Meeting Maplebury FC for the first time, he starts to suspect they may not be all that good...

We go behind the scenes to look at the filming of the football sequences for Episode 5 of the second series of White Van Man.