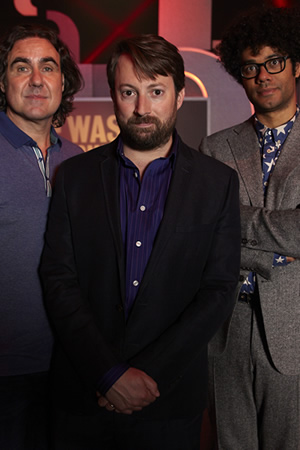 David Mitchell hosts Was It Something I Said?, a new panel show based around quotations. We find out more about the format below, plus talk to the comedy star about how he's keeping busy (but not too busy)...

Hello David. This is another new panel show. How does this one differ from all the other formats?

It's a quiz about quotations. I don't think there's been a panel show about quotations on TV, although I think there is one on radio. Our aim has been to make something funny, discursive and interesting. I love panel shows and I've done lots of them, but I wanted this to be very much freewheeling and chatty, rather than a very energetic, 'tutty' type show.

All the episodes have now been filmed. Have you had a good time making them?

I think it's gone really well. The audience has had a laugh and we've had lots of funny and irreverent 'rifts' from people. The subject matter has been interesting, but alongside quite important people - Martin Luther King for example - we've been talking about not very important people too, like Paris Hilton. So, yes, it's been fun. I've enjoyed it.

You're in the host's chair for this, rather than acting as a team captain or guest. Does that constrain you comedy wise?

On this show I have lots of opportunity to chip in and try and be funny myself, and join in with where the banter is going. I think there is more responsibility in the host's chair though. On Would I Lie To You? if I can't think of anything I can not say anything for a bit... but if there's silence, that's the host's fault. So I'm aware that I've got to keep the ball in the air and I have to push the gameplay through. So there are more chores involved [as host] than being a team captain or panellist, but it doesn't stop me joining in and making jokes as well.

You seem to work really hard David. We hope this doesn't sound rude, but you've surely got enough money in the bank now you could afford to take a break? Not that it isn't a pleasure to see you on screen, we hastily add!

I do have breaks. I used to have very few breaks, but now I'm married I want to take breaks more often because there's someone to go on holiday with. So I do take breaks, but this - comedy that is - is my hobby. It's what I want to do. I would choose to do it under any circumstances, so I don't do it just for the money.

The other side of it is that I'm a timorous freelancer. If I didn't work for a few months I would admittedly still be fine for money... but I don't have enough money forever, thus I'm nervous that I should work while the work is there.

In general, the main part of a comedian's career on TV is in their 30s and 40s. You don't get to carry on doing the sort of thing I'm doing until you're 70 - unless you're Bruce Forsyth - so I do have the feeling that I should do lots of things now, whilst in the key working years of my life.

Do you not think there will still be jobs for you when you're 70 then David?

I hope there will be, I just don't think you can bank on it. I believe very strongly in Sod's Law - I think if I work very hard now thinking 'one day I won't get any work', then maybe that day will never come... whereas if I complacently go 'you know what, I'm now going to take 18 months off', I might find in a few years' time I don't have a career. 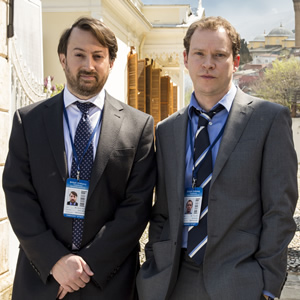 One of the other projects you've recently completed is Ambassadors - a new comedy drama starring yourself and Robert Webb as British diplomats abroad. It's in the edit now - how is that looking?

It's looking very good. It's very different from anything Rob or I have done before. It's very much more 'drama-y', and I enjoyed doing it a lot because, what I'm doing at the moment I love, being flippant and jokey, but I also like acting and it was also a proper opportunity to do some acting.

Acting is something I haven't had so much of a chance to do recently. I mean I do in Peep Show, but there aren't huge challenges for me with that character now, so it was nice to play a new part. To play someone who finds themselves in situations I've never found myself in and, you know, just focus on that kind of performance rather than reading a joke off an autocue or thinking of something funny to say back to Lee Mack. It made a very nice change.

You mention Peep Show - there's a feeling the show is coming to an end soon. Robert Webb said as much in an interview earlier in the year...

I think I agree with him. We've had eight series, which is more than we ever would have dreamt of. There's another one certainly commissioned, and hopefully that will happen in the not too distant future, but after that...

I feel with sitcoms it's nice to carry them on for as long as possible. A situation that really works and people really like is much harder to come up with than it is to keep going with. But, we're all getting older and the situation that Mark and Jeremy are living in with cease to be credible if they get much older, if you see what I mean?

For example, if we [the characters Mark and Jez] are in our late 40s - that wouldn't work. Two men in their 20s - which was what we were when we started sharing a flat together - that doesn't beg any questions - that happens. Two men in their late 40s sharing a flat together who aren't in a relationship with each other - that's a very specific scenario and you need the credible plot background for that to happen. We're not in our late 40s yet, but...

[Between talking to David and this interview being published, Channel 4 confirmed the next series of Peep Show is indeed expected to be the last]

We really enjoyed your book. Any thoughts on writing another?

I loved writing the book and I'm really proud of it, so I'd love to write more prose in that sort of way. I don't think I'll do another memoir for another few decades - I think I need a few more life experiences to justify a book... but I'd love to have a go at a novel one day.

I'd have to take a bit of a break from doing other things to think about it properly, but - no - I'd be very sad if I didn't publish another book at some point.

That's going to get tricky, what with there already being a fiction author called David Mitchell [Cloud Atlas etc]...

I can't say I'm not annoyed by that. I suppose it's not his fault [laughs].

'Was It Something I Said?' is on Channel 4 on Sunday nights at 10pm, with extended repeats on Friday nights.