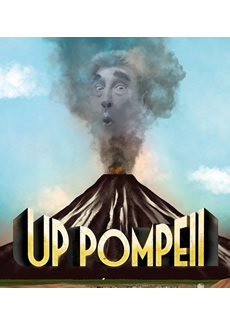 Marking 50 years since Frankie Howerd's TV sitcom first aired, this is a new adaptation of the successful spin-off stage play by Miles Tredinnick, based on the original characters and scripts by Talbot Rothwell, adapted for audio by Barnaby Eaton-Jones with Daniel McGachy and Iain McLaughlin.

Welcome to ancient Pompeii, where the steps of the Forum are peopled by nubile slave girls and a range of outrageous characters including Lurcio's owner, Ludicrus Sextus the Senator, his wife Ammonia, his son Nausius and his daughter, Erotica. Lurcio attempts to deliver his prologue and begin proceedings before he's quickly caught up in the myriad of sexual liaisons in all quarters of his master's house. Why does Ludicrus not leave for the Senate meeting in Rome? Why does his wife return so quickly from the country? Who will take care of the escaped slave girl, Voluptua, and will Nausius's love poetry improve? Whilst growing chaos ensues, an increasing rumbling is heard in the distance - what could that possibly be?

A new audio adaptation of the Up Pompeii! stage show, written for Frankie Howerd, is to be recorded next month with a star cast.