It's no longer B(B)C, but AD - and Lurcio is now a free man, running a wine bar and an owner of slaves of his own! Unfortunately, he's being blackmailed by Villainus Brutus and is charged with fixing a gladiatorial bout. 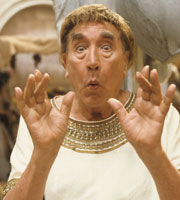 Lurcio is now a free man, running a wine bar in Pompeii. The trouble is, he's being blackmailed by Villainus Brutus, who wants him to drug a gladiator's wine in order to influence the result of his next fight. As per usual, things don't quite go according to plan, and Lurcio finds himself in the arena.