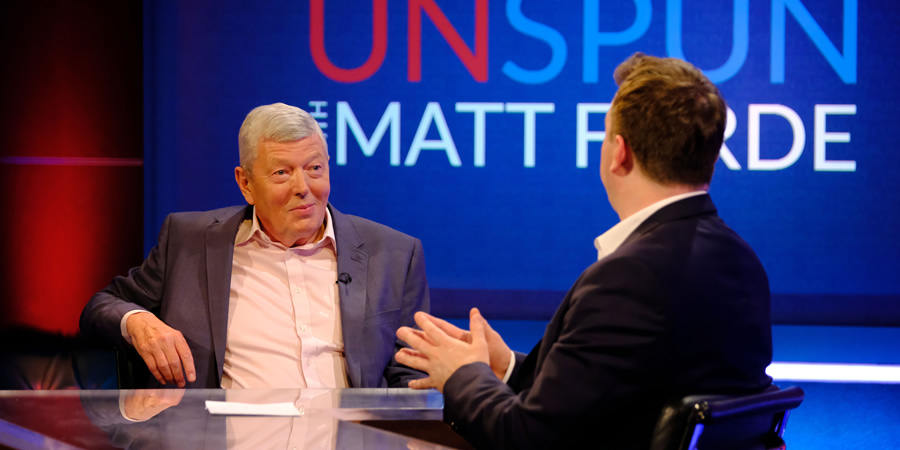 In the first episode of his brand new political comedy show, Matt Forde is joined by Alan Johnson, Labour MP for West Hull and Hessle. Johnson talks about Corbyn and how he handled the EU referendum, and explains his views on spanking.
Preview clips

Alan Johnson on Jeremy Corbyn: "Jeremy wasn't the most passionate campaigner in favour of the EU. I would say, at best, he was neutral, but he had people around him - John McDonnell, Seumas Milne - who were fiercely in favour of a NO vote."

When Matt asks if Alan has had any interaction with Corbyn since, he responds, "None. None from the referendum onwards."

Alan blames the former PM for the EU referendum vote: "...and, as I say, it's not why we lost it, we lost it for all kinds of reasons including a former PM who's now leaving Parliament, David Cameron, who just messed this up completely - disaster from start to last. He got 44% of Tory supporters - if he'd got 50% it would have been won."

Matt raises a YouGov sex survey poll that claimed to reveal the way you vote can indicate your sexual preferences, and that Labour voters are more likely to enjoy spanking and sex outdoors. As Matt closes out the interview, he cheekily asks "Spanking or the great outdoors, Alan?". Alan Johnson responds, "spanking is underrated", later explaining "it's the satisfying smack of skin on skin."

Owen Smith was billed to appear in this episode but pulled out late in the day.

Matt Forde looks at the sexual fantasies of the various political parties.

Phil Wang talks about the UK's relationship with China.