First aid training gets under way but Brian is skeptical about such matters; pharmacists rule medicine, you see, not Jonny-come-latelies. Security guard Ian, meanwhile, is at his wits' end because of an unwelcome visitor: a fox. He'd appreciate it, then, if Harry (and his collection of fake fur coats) would stop winding him up. 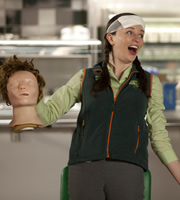 First aid training gets under way at the store but Brian is sceptical about such matters - apparently, it kills more people than it saves. The pharmacist is happy to park his firm, if entirely misinformed, beliefs, however, when Daniel says he needs an 'expert' to help him run the course, with one student proving particularly difficult to teach: you guessed it, Charlie.

Security guard Ian, meanwhile, is outfoxed by wind-up merchant Harry, and Linda urges Neville to stand up to his horrible ex-wife.