While salvation arrives for Gavin in the form of new assistant manager Daniel, sparks fly when VIP till girl Charlie also hits Valco. Charlie isn't the brightest spark in the cereal box, but she'll probably keep her job because her dad happens to own the supermarket empire. Somebody should mention that to Daniel before he makes a drastic decision he'll regret... 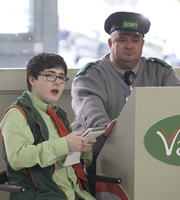 Salvation arrives for Gavin in the form of ambitious assistant manager Daniel, who began his Valco career sweeping the warehouse floor. Hitting the ground running, the poor lad has to rein in Rose who, having had to deal with a particularly pungent customer, has decided that, from now on, she won't serve anyone she doesn't like the look of.

Gavin's stress levels rise, too, after receiving a visit from Brendan O'Connor, the man who owns Valco - and he's not alone. Meet Charlie, the bigwig's dizzy daughter and the Warrington branch's new till girl. The only problem is that she's exceptionally rubbish, so much so that Daniel, who has no idea about her heiress status, makes a decision he comes to regret.

Elsewhere in the store, Neville gets lucky - with his ex! Meanwhile Brian is having none of it when Margaret tells him she's booked an appointment to see a doctor about her vibrating hip.