A new term means a new intake, and for the first time the doors of Trinity are thrown open to less privileged students, including Charlotte Arc, whose professor father is found dead shortly before term begins. 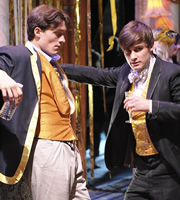 One evening as Richard Arc leaves the church at which he is vicar he is accosted by a sinister stranger, demanding Arc tells him what he knows. Richard, petrified, suffers a massive heart attack and dies.

On a bright Autumn day we first see Trinity college - red brick, classical and grand. On the steps of the college sits Charlotte Arc, daughter of the recently deceased Richard. Also arriving for the start of term is Theo, a cool fresher, clearly feeling slightly out of place among the eccentric Trinitonians.

Meanwhile the beautiful, but icy, Rosalind is visiting her cousin, Dorian in his rooms. With little preamble the pair begin having passionate (and noisy) sex.

Worried about the lack of morals at the college, Charlotte's mother gives her daughter Richard's treasured bible and leaves. As Charlotte picks up the bible a photo falls out of her father at Trinity with another woman.

In the office of Professor Linus Cooper, the extremely twitchy academic is working on some complicated looking medical files when Maltravers, the Dean, enters looking for him. In reference to the files Maltraver's enquires after 'Galahad', clearly the subject of their research. According to Cooper he is not doing well and they need a new 'hourglass' to continue.

Charlotte introduces herself to Theo, and invites him for tea in her room with a few people. Theo finds himself in a room with four earnest, and quite dull, Christian students who tell him more about the Feast of Fools - how it is run by the Dandelion Club and will be a debauched and shocking evening.

In the staff common room Maltravers welcomes Angela Doone, the new Warden of Trinity College, and introduces her to the Dons as the woman who will modernise Trinity. But later, when Dorian visits the Dean he warns him about the new modernist Warden; Maltravers informs Dorian that the Feast of Fools has been cancelled by order of the Warden; apparently picking two students from lower-class families to be the jesters for the year is no longer acceptable.

Theo meets a dizzy and vague new student, Maddy. Meanwhile Angus and Raj, a pair of geeky students, meet, bond over a bong and discuss their main ambition at Trinity; losing their virginity.

The Warden greets an old friend, now a professor Dr Gabriel Lloyd. He is clearly awkward around her, and apologises for confessing his love for her twenty years ago. At the welcome lunch the professors are visibly shaken by the mention of Charlotte's name, and Charlotte recognises The Warden as the woman from the picture of her father.

During the Latin grace Theo is unprepared and ends up being laughed at by the entire college. Rosalind saves him by continuing the grace, but not before Theo is embarrassed. He clearly feels like a fish out of water here. Theo meets Dorian and tries to blag an invitation to the Dandelion club party that evening. He is humiliated when Dorian shows him up in front of the club members.

Theo is packing to leave following his double humiliation. Charlotte tries to persuade him to stay, but he is adamant he is going to leave, that is until he bumps into Rosalind who flirts outrageously with him.

The Feast of Fools is a debauched, hedonistic party, full of the college's most beautiful students having a good time. And in the centre of the room a large box hides Angus and Raj, clad only in tiny thongs. They think that their participation as the fools will get girls to notice them and lead to the sex they crave.

As Charlotte works through the night in the lab on a project given to her by Maltravers, the lights suddenly cut out and she sees a shadowy figure in the doorway which looks terrifyingly like her father, Richard Arc. She flees the lab, distraught, and is found by Dorian who comforts her in the only way he knows how...

Maltravers and Cooper stand in front of the Trinity crest with the flashing light. An American woman's voice takes their updates on 'Galahad'. The voice tells them to "guard the project, protect the Dandelion club - the future will come sooner than they think."