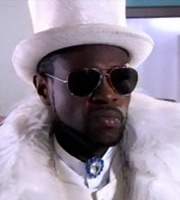 It's time for the BRAs - the British Rap Awards - and the hot ticket event of the year for any self-respecting, hip-hop wannabe. Trexx and Flipside are going to be there and it's their time to hog some limelight. Ollie and Brilliance have it all planned - the boys can get 'papped' by popping up behind the real rap stars as they arrive.

B-ICE decides wearing 'street' isn't cool enough for this year's event. So, despite Chinaza's advice to the contrary, he decides to go 'gutter'. The clothes he swaps with a 'street brother', down on his luck, have the sweet smell of success. Well, they certainly have something about them that doesn't smell right.

Trexx and Flip decide to arrive in style and set off in a limo. The only problem is that budget issues mean it's shared with a particularly rowdy hen party.

Later, abandoned on the streets, they find themselves with no clothes and no tickets to the BRAs. Have they missed their chance of fame?

B-Ice is looking for a new wardrobe.