Series 1, Episode 6 - The Passion Of The Chris 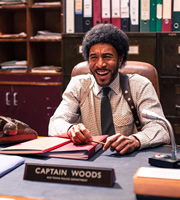 It's Justice City's darkest hour. A mysterious computer hacker launches a cyber-attack on the whole city demanding just one thing - John Mahogany. Meanwhile, Rust has a sneaky plan to avoid the tax inspector, to whom he hasn't paid a penny to in five years.
Preview clip

Justice City is held hostage by a computer hacker who knows a lot about starters.