Series 1, Episode 4 - The Twist Of The French Nicker 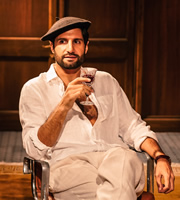 The world's greatest art thief, Gerard Cliché, is in town. Meanwhile, Mahogany and Rust are out to win The Golden Doughnut, the prize for the best crime fighting duo. It's safely in the bag... providing their rivals Romero and Byrne don't turn up.
Preview clip

The Mayor explains his plan to master criminal Gerard Cliché.