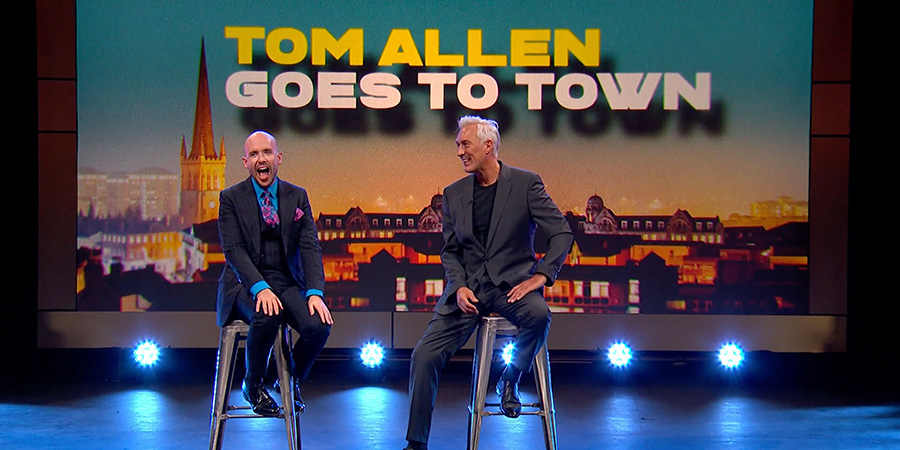 Comedian Tom Allen loves travelling around the UK - and as a Bromley boy it's small town Britain he particularly loves.

In this new special commissioned by Channel 4, Tom champions one of those unsung places: Wakefield, West Yorkshire.

Spending a week in Wakey - a city, not a town - Tom sees the sights and meets some of Wakefield's extraordinary characters, before putting on an end of week show to celebrate everything and everyone he's encountered.

Along the way, Tom takes in one of the world's biggest rhubarb crops, explores Wakefield's beautiful cathedral and visits one of the only drive-in fish and chip shops in the world. He also buys a round of Wakefield's famous steak pies and comes over all Nick Knowles when he renovates the local Caribbean restaurant for the family he's been staying with.

Concluding his week in Wakefield at the beautiful Theatre Royal, Tom is joined by his assistant for the night, Spandau Ballet's Martin Kemp, to host a full house of locals.

Wakey vs The World pits local attractions against famous global tourist hot spots, and Tom discovers some of the weirdest possessions owned by the people of Wakefield. The big finale features a specially composed singalong involving a cast of hundreds, including a 100-strong gospel choir.

The Theatre Royal show is made for the people by the people of Wakefield... and Tom Allen. Together they're going to show the rest of the country just what makes this West Yorkshire cathedral city special.