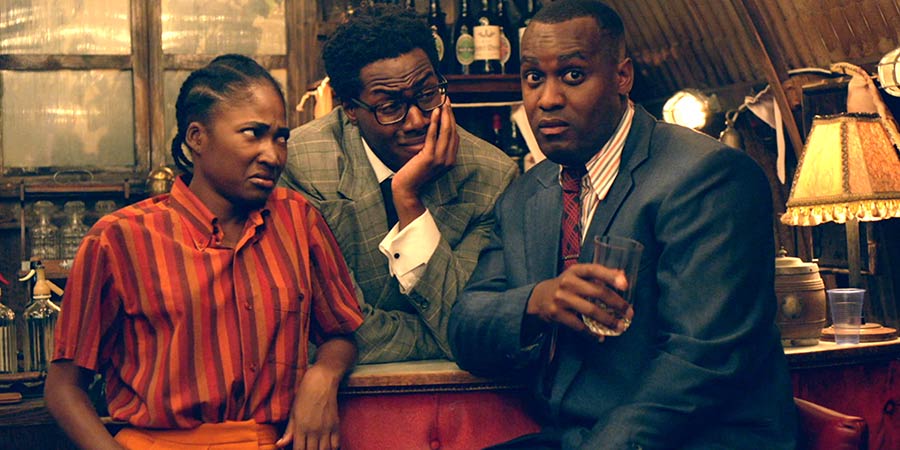 Writer and star Daniel Lawrence Taylor, who plays Nick; Adelayo Adedayo, who co-stars as Lauren; and Kadiff Kirwan, who plays Jason, sat down to answer some questions about the brand new second series of Timewasters.

Daniel, you are the writer - the creator - so how did it feel knowing you were getting to do it all again, Series 2? Did you want to take it to a new level?

Yeah. It was quite exciting, having done the twenties. I think we always knew we'd go to a different time period. Doing the 1920s was so much fun, but jumping to the fifties kind of made sense because you then had so many Western Caribbean characters, and that's my background. It was fun to fun to play with those characters and worlds - and literally name people after family members!

What were the main influences for the 1950s references?

One of my favourite books is The Lonely Londoners, which is about a bunch of young men who arrive on the Windrush. It was really nice to re-read that. But then the Windrush scandal happened, dropping a load of information into my lap just as I was writing Series 2, which was quite handy. But a lot of it you just 'know'. Growing up, you just know it, from your family.

What did you enjoy most about filming Series 2?

Adelayo: I think just going back again, being with these guys, being around everyone again. 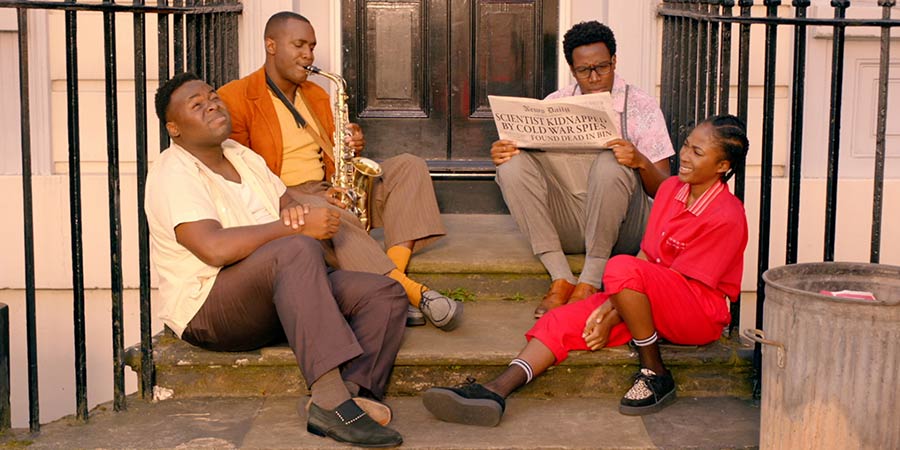 Adelayo: There's a scene in Episode 2 where Lauren's just had enough of the un-feminism around her and she just goes crazy. Feral. That was such a release - I didn't know I had it in me! It was really fun.

Daniel: She literally broke props when we were filming that scene. My watch, costume department weren't too happy about that...

Kadiff: Getting back with the gang was pretty much the highlight for me too. And working with Anna Chancellor - she just brought another level to whole of Timewasters. She is very fun to work with.

For you two as cast members, what did you think when you received Daniel's scripts? Did you feel the characters had been developed, that you were going to a new place?

Kadiff: Oh, this guy's a dickhead. Three months before we started filming, he's like "I hope you're going to the gym". I was like "what?!?"

And did you go to the gym?

It was a pep talk!

Kadiff: No, it wasn't! He was like "you've got loads of nude scenes" and "I hope you've gained no weight over the last year".

Adelayo: No, for me Lauren's just money. She's all about money, no character development. She's still the same. But I felt the series in general was a lot more reminiscent of directly traceable facts, people and events. Like the founding of Ronnie Scott's jazz club, and Myrtle in the first episode - everyone's got an auntie like that. It felt I could related to it a lot more than the 1920s. 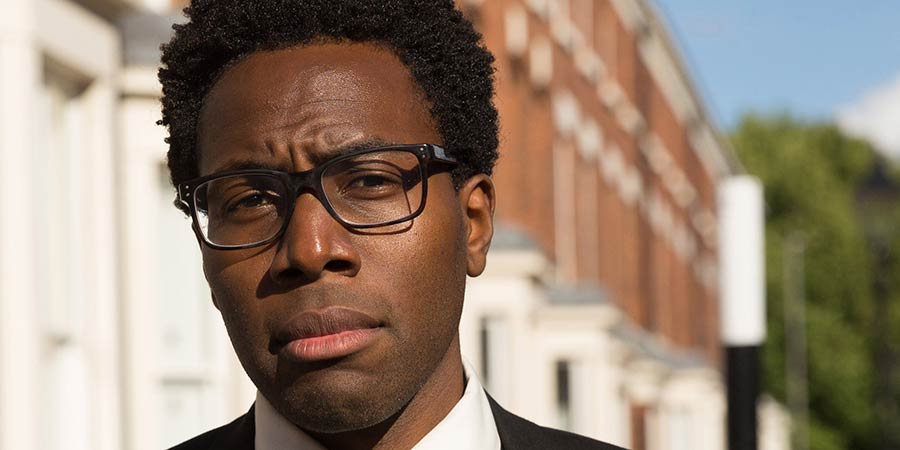 Daniel, what was the difference in Series 2 for you writing?

I suppose they were all plusses. I knew the characters more, which made putting it on paper a lot easier. Also knowing what these guys are good at, knowing that Kadiff likes to get naked... It was quite fun putting all of that into the scripts. So it was really cool.

And creating these characters - are you like your character?

Kadiff: But you also think of the group and the whole vibe for everyone.

Daniel: Yeah, there are similarities with the characters all round. Horace IS Samson. When he came to audition he struggled to even get through the doors, which had me and my producer laughing. They had these really weird doors in this office, and you'd have to open both in order to get through. But he's trying to squeeze through just one, he's sweating as well, had a helmet on, and I think he'd lost his bike. As he's telling this story he then goes straight into the audition scene, and we're like "can you just do what you were doing when you came through the door?" He was Horace through and through. So I just write Samson!

How about Kadiff and Adelayo? Do you write for them? Adelayo, do you feel you can become Lauren very easily...?

Adelayo: Did you write for 'me'?

Daniel: No, I don't think I did. When she came in she was hilarious. Initially, we were casting just for a read-through. Me, Kadiff and Samson were playing these massive characters, whereas Lauren was much more subtle. So when she came in to audition we were initially like "oh no, she's not for us". Then later that evening I went back and watched her audition tape, and it was incredible. Me and my girlfriend were sitting there pissing ourselves laughing, so we had to get her back in. And I'm so glad we did because she's a brilliant screen actor. She's a brilliant stage actor too of course, having seen her recently at the Young Vic! 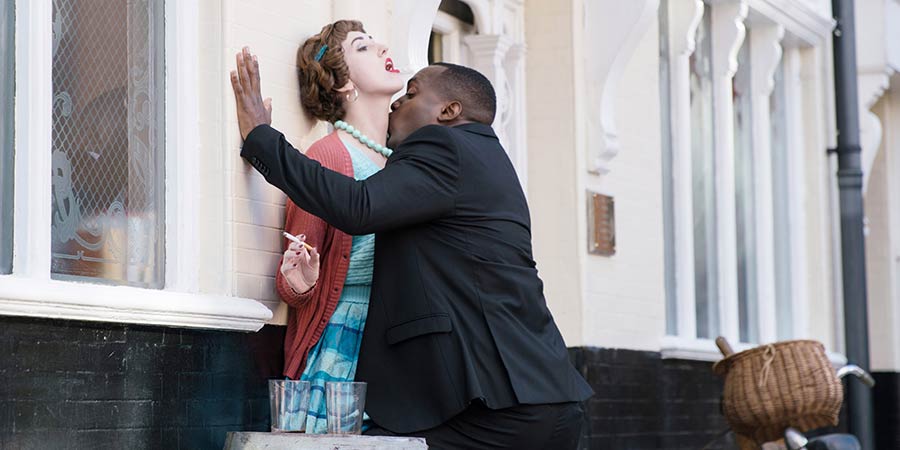 Kadiff's character... are you also a sex hound?

Adelayo: I think we were at Kadiff's apartment. We'd just eaten and were playing cards and stuff. It was his go, but he's like "one second ... I'm just sexting". Then he just came back to the game!

So Kadiff, on a Friday night maybe, when you're out...

Kadiff: It doesn't have to be Friday.

Daniel, if you were starting writing a third series, where would you take it? What year?

Daniel: I have got ideas, but I don't know if I want to share them! I want it to be a surprise... But yeah, I've got ideas.

Daniel: I don't know what this time machine is doing!

If you each could time travel, what era would you visit?

Daniel: Errr ... I mean, I enjoyed the noughties! Good music. It's only down the road. Yeah, noughties for me.