Mitch and Richie use drugs as a force for good and put up all the flatpack furniture in the nursery while high as a kite.
Preview clip 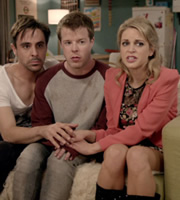 Meanwhile, Mitch and Richie (having all jointly sworn off drink and drugs in solidarity with Alice) stumble across a stash of drink and drugs. Will they be strong enough to resist temptation whilst also assembling all the new nursery flat-pack? Or is it just an immutable fact of life that flat-pack is far more easily assembled on drugs?