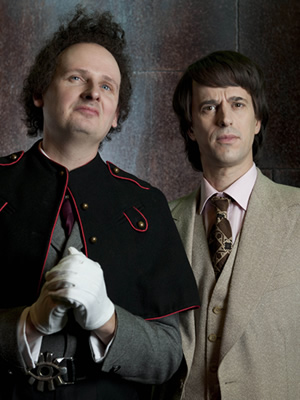 This Is Jinsy has marked itself out as one of the most distinct British comedies in years. With the second series out now on DVD, we chat to creators and stars Chris Bran and Justin Chubb about the show...

Mud packets bursting over the men marshes, with a chance of storm - clobber around noot-time. Possibility of dog - shake with puddle displacement and backsplash 3. Clouds clenched then whittling pookly - much by peaktime.

This Is Jinsy comes across as a fully realised world, with a lot of thought having gone into the style and language. Could you tell us more about how you developed the show?

We developed Jinsy for a year or so before we made the BBC pilot [in 2010]. Because we're both from Guernsey it seemed a good idea to begin from something real that we could draw on. There are some rather strange Guernsey customs, like the Clameur de haro, which is an ancient French law people still use to try and redress legal wrongs, and which involves kneeling down and intoning the Lord's Prayer backwards in Guernsey-French! (This turned into the concept of 'The Glamorous Arrow' in the Jinsy episode where eco-warrior Edery Molt uses the arrow to try and prevent Maven building his nose bridge).

Quite a few of the character names come from real Guernsey surnames too, like Mrs Goadion or Arbiter Lertock.

The experience of living on a small island and everyone knowing everything about everyone else fed into the idea of the tessellators - which seemed like a funny, if slightly sinister, thing to imagine - a tiny place with far more security cameras than people. The tessellators have various functions: a nozzle to download products, a slot to pay fines with, and a screen to show ads and propaganda.

We fleshed out the world in as much detail as possible, beginning with a big sketchbook full of maps, character sketches, diagrams of some of the strange devices used in the adventures - like the nameworm suction unit, from Series 1, for example - and lots of scribblings about storyline ideas and visual gags. By the time we came to talk to the BBC about a pilot, we already felt we knew a lot about the island, its geography and mythology, and it kept growing from there. 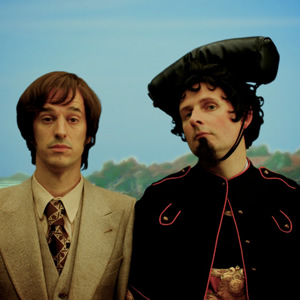 How did you decide which of you would be island ruler Maven, and who play dogsbody Sporall?

One of the first things we did was to film a ten minute version of Jinsy in the studio where we write (in an old dairy in West London). It was this little taster tape that eventually led to the show being commissioned. Because there was no one else around, we ended up playing all the parts ourselves.

The starting point for the taster was us filming ourselves playing Maven and Sporall, overseeing the island from the tower. We just improvised and messed about and sort of accidentally ended up playing the characters we did.

We see you in the series playing other characters in the sketch elements. Do you have any favourites?

We seem to constantly be dressing up as women and delving into a rich archive of horrendous outfits from the sixties and seventies, so that's always a laugh.

We'd have to say Melody Lane and Pam are our favourites. And we both really enjoy playing the old men, Retch and Hoik. We try to channel Keith from The Prodigy when we're performing them!

The series is notable for featuring very well-known guest stars. Did you ever pinch yourselves to check that these people really were acting out your scripts with you?

We were constantly pinching ourselves when it came to the guest stars.

There is usually a transition into peculiar hairpieces, beards, knitted outfits and prosthetic teeth. With Derek Jacobi, for instance, we'd sort of forgotten till he came in that he was going to be dressed in a massive baby-gro and frilly cap, and would be performing largely in an oversized Victorian pram. But he was absolutely charming and very happy to do whatever was required of him. 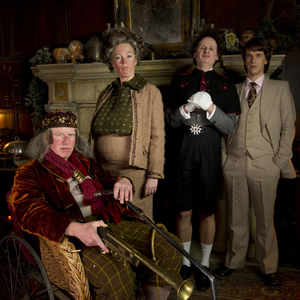 People like Olivia Colman and Eileen Atkins brought so much out in the characters, that it was very exciting seeing it all come to life. We felt so privileged to hear our words being spoken by such talented performers - who all treated the roles with great seriousness. And that's what's been so lovely for us is that they all take the show seriously, despite it being quite surreal and silly! If that tone slipped, we think, it wouldn't really work.

Did you write the parts with guest stars in mind, or find people to fit the roles?

We wrote Dr Bevelspepp specifically for Stephen Fry in the 'Intelligent Hair' episode, hoping he might enjoy some of the wordplay and bluster of his character, and it was fantastic when he said he would do it.

Writing characters suddenly gets much more fun when you have an idea of who might be playing the part, because you start to hear the voice or imagine physically how people will look.

It's hard to pick out favourites but Stephen Mangan in a Bowie-tribute knitted jumpsuit, playing a kind of Bond villain, was such a fun day to film. And Olivia Colman and Phil Davis as Joan and Roley Jenkins, who ended up as somewhere between Dickens and PG Wodehouse, on the most amazing rotting Manor House set - that felt like we were suddenly in a bizarre BBC Classic serial!

But other roles just absolutely came to life in the hands of the brilliant performers who came in; Simon Callow in the snow, getting very red in the face shouting and waving a stick; or Catherine Tate being attacked by a goat are images that are hard to get out of your head! 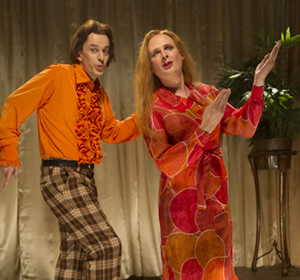 Each episode has a key bit of music - some of them absolutely brilliant, and very catchy. Do you come up with the lyrics for those?

We write all the songs while we're scripting the episodes. We take little breaks when our brains are hurting from trying to think up lines or stories, and the songs are a bit of light relief.

We have a ukulele and a battered acoustic guitar with the top string missing, and we tend to thrash away on those. We've also got flutes and recorders, a little accordion, a baby xylophone and a 1930s snare, which we grab sometimes as well. The lyrics and music usually come at the same time.

If one of us sings something that makes the other person laugh, we quickly record a snippet and it hopefully develops into a whole song later down the line.

Do you have a particular favourite song from Series 2?

Mittens is a favourite because it's the most atmospheric and textural song we've done so far, with a sort of wintry, folky feel - as well as being very silly, of course.

And Female Badger with Rob Brydon was, again, just so much fun to film, with the two of us dressed as ridiculous blonde backing singers. Rob definitely enjoyed his enhanced Bruce Springsteen muscles!

Is it frustrating for you that the show is going out on Sky Atlantic - a channel that you can only see if you've got a Sky subscription?

Sky have been brilliant in allowing us so much free rein to bring our vision of the show to the screen, and Lucy Lumsden [the Sky Comedy commissioner] is now being recognised for the wide range of shows she has championed through Sky, so we are of course delighted that we've had the chance to make two series there. 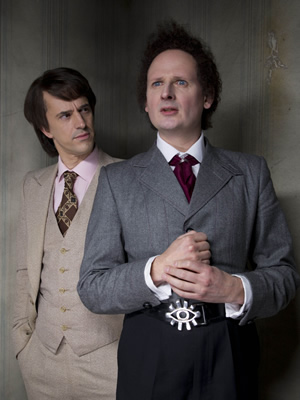 But it is, of course, frustrating to have friends constantly telling us they don't get the channel so can't watch the show, as we'd love to reach a mainstream audience. We seem to have built up fans from a wide age range and people have really started to get into the detail of the show, enjoying some of the catch phrases and concepts. So, yes, it would be fantastic to play on a more accessible channel.

We're so pleased to have the second DVD coming out; and the show is now available in other countries - like New Zealand, Australia, Belgium, Finland, Russia - and the States via Hulu - so hopefully more and more people will eventually get to experience Jinsy.

Series 2 ended on a sort-of cliff hanger. Any news on whether there will be a third series so we get to see what happens next?

We're still waiting to see if Sky want more, but we'd love to make a third series. We really love making the show and feel very protective towards it. In some ways it really feels like Jinsy is out there somewhere, trundling along in a parallel universe.

If you do get a third series, any thoughts on who you'd like to appear in the show as guest stars?

There are so many incredible performers we would love to get on the show. But people like Barry Humphries, Victoria Wood, Mark Rylance... Maybe Jennifer Saunders in an on-screen appearance.

We're so incredibly lucky to have such a range of stars in this country to draw on, from a rich lineage of classic comedy and drama. It still feels like Britain has the crème of performers in so many ways, particularly when it comes to eccentric cameos.

Do you have any ideas for other comedy projects too?

We're currently working on several projects, some of which will hopefully allow us to continue writing and performing together, while others we might write for other people. We want to build on the style, language and imaginative scope of This Is Jinsy with our next project, if possible. We're also recording more music and plan to release an album later in the year, again continuing in the same vein as our Jinsy songs.

Sounds great. Thank you very much for your time Chris and Justin. Nightly Bye!

Series 2 of This Is Jinsy is out on DVD on Monday 24th February 2014. Shop Online