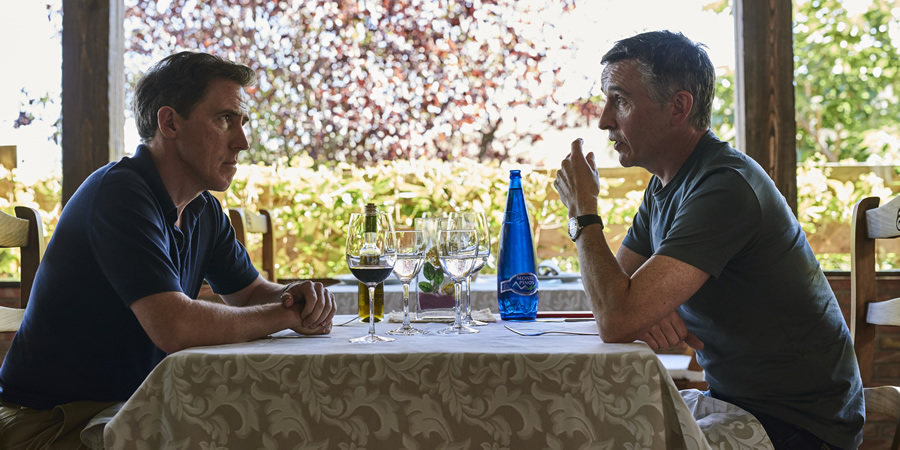 While taking in some local cuisine, the pair have time to reminisce over those who sadly left us in 2016, and then compete over who can do the better impersonation of them. Later they visit one of the many attractions down the 'Dinosaur Road', allowing Rob to pose for a picture in front of a fibreglass iguanodon. "Which one is the dinosaur?" quips Steve.

Upon leaving Sos del Rey Católico, you may want to take a detour to visit the Monasterio de San Juan de la Peña, popular with pilgrims due to it being thought to have once housed the Holy Grail. Or if the 90-minute trip is too far (even for a chance of finding the Holy Grail) you can head straight to your next destination, cutting through the rocky terrain of the region to the small Riojan town of Prejano, with a population of just 200 people.

Here you'll find a restaurant considered a gastronomic treasure by those who've frequented it. La Posada del Laurel specialises in traditional Riojan cuisine, preparing and presenting its dishes with a creative spark, with food being harvested from the restaurant's own orchard. It's the perfect place to sit and pay respects to those who left us in 2016, or have a slightly barbed discussion regarding a very successful former Gavin & Stacey co-star.

While you're in the area, why not take a drive through the region's many sites of prehistoric significance along what is known as the Dinosaur Route, featuring a great number of dinosaur footprints dating back to the Jurassic and Cretaceous periods. Once you're tired of posing with the fiberglass dinosaurs that proliferate the region, get back on the road to spend the night at the imposing medieval castle - now a luxury hotel - that overlooks the historic town of Sigüenza.