This week Steve and Rob visit Pompeii and then have lunch at Relais Blu on the Sorrento coast, overlooking the isle of Capri.
Preview clip 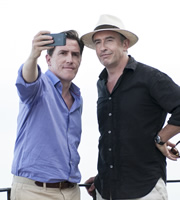 Steve and Rob visit Pompeii and have lunch at Relais Blu on the Sorrento coast, overlooking the isle of Capri. En route to their next stop, Michael Bublé is the talking point.

At the hotel, Rob receives a call from his agent telling him that he has got the part in the movie he auditioned for.

After visiting another restaurant and doing more impersonations, the two of them head back to their rooms and Rob calls his wife wanting to tell her about his news - but she is too busy to talk and he does not get a chance to let her know. Steve calls his son Joe, who says he wants to join him in Italy.

In this episode, Rob addresses his wife as Sarah on the phone. In all previous instances her name has been Sally.

Where do you stand on Michael Bublé?