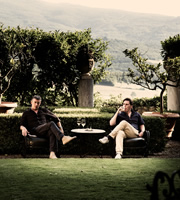 Steve and Rob visit Viareggio in Tuscany where Shelley's body was washed ashore. They have lunch at Trattoria Albana. Rob later gets a call from his agent saying that he needs to record himself on tape for a potential part in a film.
Preview clip

How similar is Rob Brydon to Lord Byron?