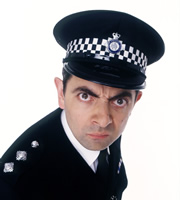 Raymond Fowler is the commanding officer at Gasforth Police Station, a position he has worked hard to reach. He is a dedicated copper but ultimately an old fashioned one. He still believes in spit and polish, looking very smart at all times, and even sends the Queen a birthday present from the station.

Raymond is the epitome of a sad, middle-aged man. His idea of a good time is playing board games, building Airfix models and reading Biggles books. Whilst he has enjoyed success in his professional life, his personal life has been a different story. An earlier marriage to Susan unfortunately ended in divorce and the only thing that really came out of it was son Bill, now in his late teens and far more like his father than Raymond thinks.

Raymond now lives with his Desk Sergeant, Patricia Dawkins. They have been together for ten years but, to her constant frustration, their sex life is practically non-existent. When he's not working or engaged in his model building, Raymond is a keen member of the Gasforth Amateur Dramatic Society. 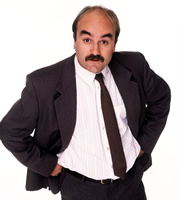 D.I. Grim is in charge of the CID (Criminal Investigation Department) at Gasforth Police Station. Over-zealous, self-important and condescending towards Raymond and his uniformed men, Grim is not a popular member of the team. He believes himself to be God's gift to policing but it's rather a wonder how he got to be an Inspector at all.

Grim is a constantly frustrated man, both professionally and personally. At work he is frustrated by the lack of what he calls "real crimes", such as bank jobs, murder, prostitution, drug dealing, credit card fraud and organised crime. At home he has a volatile relationship with his wife Tina. By his accounts they spend much of their time arguing, but have somehow remained married for 20 years and produced a teenage son, Darren. Perhaps the key is that she seems to spend most of her time 'getting ready' in the bathroom?

Derek is very keen to climb Gasforth's social ladder. Having been turned down by the Masons he is eager to join the Todgers, a secret society who wear dresses and kiss dead turkeys' bottoms. (Although only on special occasions. Normally they use chicken nuggets.) 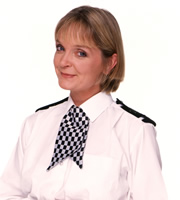 Patricia Dawkins is Gasforth's Desk Sergeant and Inspector Fowler's live-in-lover. Hopelessly in love with him, Patricia is clinging on against all likelihood that deep within Raymond there is a more affectionate - not to mention physical - side she can bring out.

She has managed to put up with Fowler's middle-aged oddities for 10 years despite being frustrated by his lack of sex drive and insensitivity. It's not that he's horrible; he's just utterly naïve and unaware. She ultimately loves him very much though, and knows that under the cold façade he puts on he can be romantic and, when driven to it, can be as passionate and protective towards her as any other man.

Whilst Patricia would like to think she's more "with it" than Raymond the truth is that they are very much two sides of the same coin!

Maggie and Patricia, as the only female police officers in the station, often confide in and seek advice from each other. 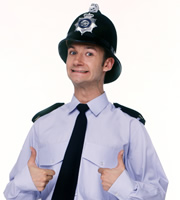 Kevin is camp, OTT and acts like a big kid. Whilst many of his colleagues suspect that Goody may really be gay, he holds a not-so-secret longing desire for fellow constable, Maggie Habib. Kevin is constantly trying to get into Maggie's knickers, despite her clear lack of interest.

Goody is a source of unending frustration for Inspector Fowler, who often scolds him with terms such as "You foul boy", "You foul youth", "You appalling youth". Fowler finds Goody an unsolvable conundrum; he chews gum on duty; he eats chocolate on duty; he slurps his tea; he can't spell; and is all-round rather child-like and slow to catch on.

It's a wonder at times how he ever got into Hendon Police College, let alone passed out! 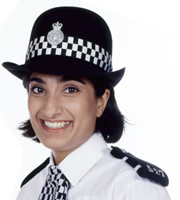 Maggie Habib is the most intelligent of Fowler's officers - although this isn't difficult with Goody and Gladstone to contend with!

Maggie is efficient and everything a young policewoman should be. Fowler rates her as his finest constable. However he also sees her as rather too smart for her own good, and despairs at her tendencies towards left-wing political ideas and causes.

Maggie is an extreme feminist and a very staunch oponent of the persecution of ethnic minorities, which is all well and good. However she does tend to go too far, subscribing to feminist theory that Sherlock Holmes and Watson are gay lovers - despite the fact that Watson is married!

When she's not being a policewoman or a feminist she is fighting off the attentions of colleague Kevin Goody who is infatuated with her despite her patent disinterest in his affections. 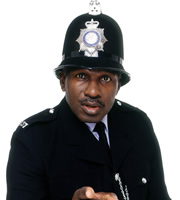 P.C. Frank Gladstone is a dedicated and long-serving member of the police force who believes the most beautiful woman in the world to be Gloria Hunniford.

Gladstone is a divorcee and based on the stories he tells about his marriage, it's hardly surprising. Having grown up in Trinidad where his father was also a policeman, Gladstone has developed a strange view of life and seems to live in a world of his own half the time.

During briefings he regularly comes out with the most ridiculous suggestions and statements, such as how he blames fridge magnets for graffiti, and seems to specialise in impersonations that involve removing his trousers.

Despite Frank's lack of success with women he is always the one Kevin comes to ask for advice about Maggie. 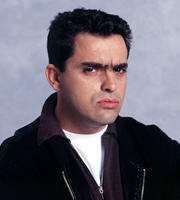 Kray is Grim's Number 2 in the loutish CID during Series 1. Deeply sarcastic and laid back, he fancies himself as a cool guy who has a real charm with the ladies.

He isn't the greatest policeman, but considering Grim has been his boss and teacher, that's not surprising! In fact, whilst he appears to be quite the lazy slacker, Kray is almost certainly both more intelligent and more productive than his boss, coasting at Grim's lower, slower level..

Kray has very little respect for his superiors, but knows what side his bread's buttered on, never failing to laugh at Grim's jokes or back him when Fowler enters an argument.

More often than not, Kray can be found on the phone to the local pizza or kebab shop. He does enjoy the perks of the job though, such as using a police ID card to push in queues and putting on a siren when late home from the station. 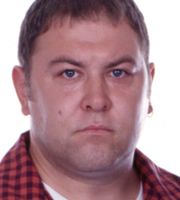 Like Kray, he likes to think he's a hit with the ladies. Boyle is a little more of an intellectual equal to Grim, and they consequently see eye to eye more than was the case with his predecessor.

Boyle likes to think of himself an American-style bold maverick. Modellig himself on TV cop shows, he'll use his ID to get into nightclubs and to impress the ladies. He also gets involved with pub lock-ins and is not above breaking the law himself to obtain an elusive pull.

Gary Boyle pushes his luck a lot but with a cheeky charm and streak of good luck, always comes out all right.