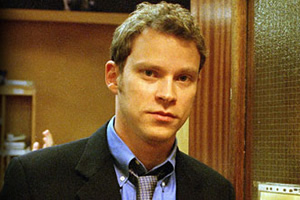 Robin is in his early thirties and is the closest to being the series' central character. He is present in the smoking room for almost the entirety of all the episodes, making him (by this method of reckoning) the laziest character. However, he likes to give the impression to boss Sharon that he is hard-working, invariably stubbing out his cigarette and making for the door whenever she enters. He is obviously intelligent although not particularly ambitious. He is generally cynical and a little melancholy.

His sexuality and attitude towards Ben is the subject of much innuendo in the series. There is a lot of evidence (although no outright admission on his part) to suggest that Robin is gay or bisexual. Most of the characters are seemingly unaware of this but it is gradually revealed to them as the series progresses. 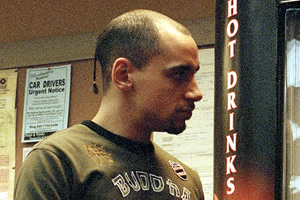 Clint is the clown of the series. He is 23 and the maintenance man, which means he is regarded by some of the characters as furthest down the pecking order.

He has a very relaxed approached to life, even to the point of suspending his attempt to repair a lift full of people in order to smoke a roll-up. He often uses street slang and does an Ali G-style 'snap' when something amuses or impresses him. He is a fan of conspiracy theories.

He is generally concerned for the other characters' well-being, often telling them to 'chill' or hugging them when something bad happens.

He is constantly thwarted in his attempts to fix the drinks machine and has consequently developed an emotional attitude towards it. (On one occasion it is fixed easily by Monique by removing a squashed cup from the mechanism.)

Clint is in a world of his own and is frequently carried away by flights of fancy. He always sees the best in things and is touchingly easy to please. If there's one thing that annoys him, it's when people in the smoking room try to "talk shop". 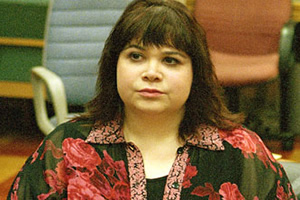 Annie is 29 and works in the graphics department. She considers herself rather 'New Age' and sometimes talks about past-life experiences. She can be very over-emotional and attention-seeking. She is constantly looking for a boyfriend and is prepared to go to extreme lengths to retain one (including dressing as the male police officer who directed the Fred West case!).

Annie is always sponging cigarettes, change for the drinks machine and food from the other characters, occasionally using emotional blackmail to increase her chances of success. She is prepared to eat almost anything, including a half-eaten salad dusted with cigarette ash and a manky, unwrapped Toffo.

Annie sees herself as permanently hard done by, but whatever Annie wants - be it a shoulder to cry on or a cigarette - Annie gets. As long as she's the centre of attention, Annie is happy. It's when she feels she's being ignored that the waterworks start. 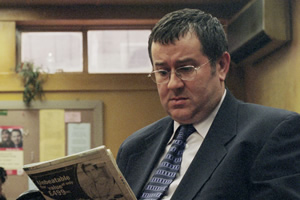 Barry is a divorced and approaching 40. He is neurotic and obsessive (to the point of hoarding used matches), suffering from many phobias and prepared to assume the worst-case scenario in many situations.

Although he blames circumstance and others for his lack of career progression, in reality there is much evidence to suggest that he is not very attentive to his job. He has a dislike for children and family life in general and makes little attempt to hide this.

Barry is usually seen attempting to solve the day's crossword, and although he considers himself something of a crossword impresario, in reality Robin solves most of the (sometimes very easy) clues for him. 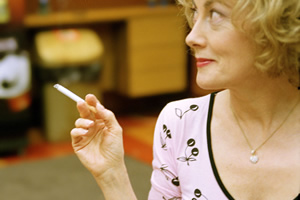 Lilian is in her fifties and recently divorced. She's enjoying her new-found freedom, but deep down longs to meet someone new and start again. Things may not have worked out as she'd planned but she hasn't given up hope just yet.

In some respects, she is the opposite of Janet: she dresses young and revealing and is quite unreserved, fun-loving and outspoken. However, both share a desire to find a man. Lilian is becoming a little desperate in this respect and will seize on virtually any suitable target.

She is a confirmed smoker, which is illustrated by her attempt to obtain an un-stubbed-out cigarette from the street outside and her near-revulsion when she thinks that Barry is giving up. 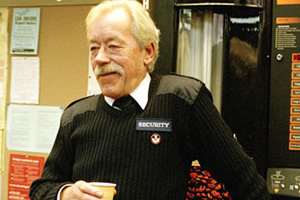 Len is a security guard, is 59 and is widowed. He is quite lazy and indifferent to his duties. He swears constantly and has a cantankerous personality (although he is quite affectionate towards Lilian). He is soft beneath the gruff exterior.

Len's character is something of a contradiction. He can be extremely gullible; for example, he fails to realise that his superior Ranjit is stealing from him and is happy to accept Ranjit's outrageous explanations of how his property keeps disappearing. On the other hand, he can be very incisive and worldy-wise, such as in Episode 2 when he muses about the brevity of life.

Security man Len may be a little gruff - and distinctly foul-mouthed - but he's a decent man who raised his two sons on his own after his much-loved wife, Diana, dropped dead. He's something of a child at heart and is obsessed with the films of Walt Disney. 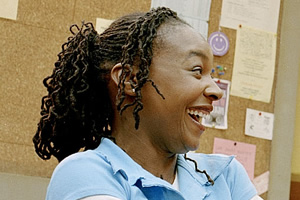 Sally is no-nonsense and straight-talking and - in her own words - 'rock hard'. She keeps her social life apart from work and doesn't take any crap from anyone. But she's soft at heart - just look at how she puts up with Annie.

Sally is 27 and works in the graphics department with Annie. She claims to be Annie's best friend, although this statement may have been motivated by Annie having just won two tickets to 'DanceFest UK'. Normally, her relationship with Annie is bitchy and competitive. She often gossips about Annie behind her back, but she will always reluctantly provide a shoulder for Annie to cry on.

Sally tends to speak her mind and isn't afraid of risking upsetting people, but she isn't without her soft side. She goes to the pub with Janet in Episode 8, even though they have nothing in common, rather than disappoint her. Little is said about her romantic or domestic situation, although she may live with her mother. 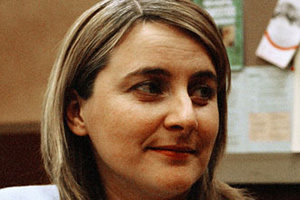 Although a main character, Heidi does not actually appear until Episode 5, when she returns from maternity leave. She is 35, married to Keith (previously married and somewhat older at 58; she virtually worships him) and mother to baby Dane (about whom she obsesses).

Heidi is very 'mumsy' and constantly refers to her seemingly idyllic domestic situation, to the near-universal annoyance of the other characters. Heidi is a non-smoker and her visits to the smoking room are motivated by her desire to tell everyone about the latest developments in her life, yet she takes very little interest in anyone else's.

Gordon is another regular in the smoking room. He always seems to be getting divorced. 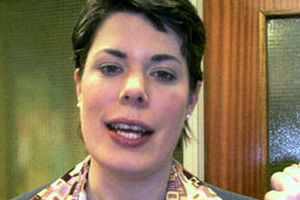 Janet is 34 and the Personal Assistant to boss Sharon. She is very prudish, dresses old for her age, never swears and does not smoke. She is constantly put-on by Janet and is terrified of her (although she occasionally tries to stand up for herself). She normally enters the smoking room on company-related matters.

She takes a very dim view of some of the other characters' slacking, herself being very diligent and obedient. However, she is not really interested in climbing the career ladder, her stated goal being, '...to find a nice man, and settle down.'

She finds it difficult to bond with the rest of the workforce but badly needs a friend she can share all her troubles with. If only her job didn't make her so short-tempered! 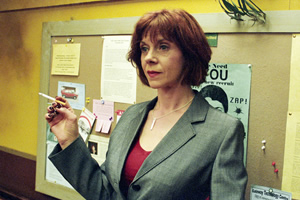 Sharon is the boss and she makes sure everyone knows it. There's a balcony outside her office where she can smoke if she needs to, so there's always an ulterior motive for her visits to the smoking room. She hates having to interact with her workforce as much as they hate her for trying.

Sharon is a cold, condescending, ladder-climbing career woman. She rates herself very highly and virtually everyone else as slacking, inadequate minions. Although a smoker, she spends much less time in the smoking room due to her attitude to work; the other characters feel nervous and intimidated whenever she enters. She constantly bullies Janet and relies on her for almost everything.

Sharon has probably achieved her position more from her tenaciousness, forceful personality and compatibility with management culture than her actual intelligence. For example, in Episode 2, she makes some shocking assumptions about the poorly-written words in Martin's letter thanking the company for his retirement party, insisting the word 'party' is 'pasty'.

Sharon's cold exterior melts only once, when she is passionately kissed by a kissogram who is taking a break in the smoking room after visiting the woman he is actually there to see. She disappears after him, with Janet remarking, 'That's not love - that's pure naked lust!'