This week, The Old Lady learns to play ping-pong in a very unusual way, an estate agent encounters a possessed potential tenant, Slaphead finds some human hair and Boris the Teenager inflicts wedding day woe on his babysitter.
Preview clips 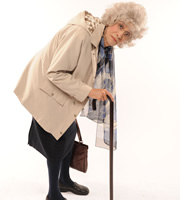 Episode one of The Pranker features a host of characters from Ross Lee's surreal world: Shifty Shopper whose catchphrase is "If I'm gonna buy it, I'm gonna try it" gets into trouble when trying out a barbeque at his local garden centre; The Old Lady proves that you can indeed teach an old dog new tricks when she finds a remarkable use for a ping pong ball in a bar; Single White Male is the blind date from hell; Movie Buff re-enacts the notorious nude scene from Silence of the Lambs; Boris the 13 year old boy ropes his babysitter into helping him out with a very unusual school photography project; and P.C. Pranker reveals a unique approach to community policing.

In this sketch The Pranker is a bald man hankering after hair. But without a wig or the money for a footballer-style transplant, what other choices are there? Well, Kim the stylist soon finds out what happens when you don't sweep the floor.

'Mystic' Ross Lee pranks an awestruck estate agent by pretending to channel spirits from the great beyond...

The Movie Buff - Silence Of The Lambs

The Pranker poses as Kelly's boyfriend. He tries to remember the name of a film.

If this old lady didn't know she could ping pong, she does now! And so does Adam, an innocent bystander trying to enjoy a quiet drink...