Martin finds new work and makes a discovery. Harriet has plans for her boyfriend though, and Neil is (finally) seeking professional help...
Preview clips 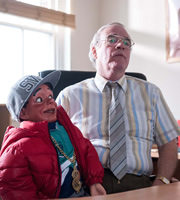 Martin lands himself a job in site maintenance at a disused Warehouse, and finds an impressive antique ring in the drain. Harriet, displeased at dating a site maintenance worker, sets up a meeting for Martin with an agent to the stars.

After signing, the agent introduces him to impressionist Nigel Lord his 'star client', who isn't happy to have a rival performer on his agent's books.

Meanwhile Neil's paranoia leads him to seek out the help of a psychoanalyst and Jean and Harriet find themselves coming to near blows over preparations for Martin's surprise 40th birthday party.

Martin's new agent has a monopoly on talent in the local area...

Martin encounters a 'precious' ring and an 'evil' presence on his new job.