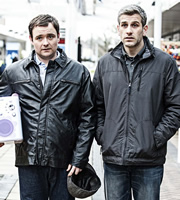 After Martin's big break as a guest on a TV show doesn't go as planned, Martin finds work increasingly hard to find since leaving his job in Site Maintenance.

His son and agent, Steven, decides to go travelling, unable to cope after the death of his mother; Martin finds a new agent in his 'news agent' Neil, who's first gig is set to raise his Impressionist profile - busking at a Shopping Centre.

After Jean and Neil's luxury cruise holiday, or 'floating prison' as Neil calls it, Jean realises they are two very different people and she decides to dump Neil.

Sharon Duncan-Brewster and Matthew Pattimore were credited in this episode but only appeared in a Series 1 recap sequence.

Martin does some 'cooking' as he mimics Breaking Bad's Walter White and Jesse Pinkman.