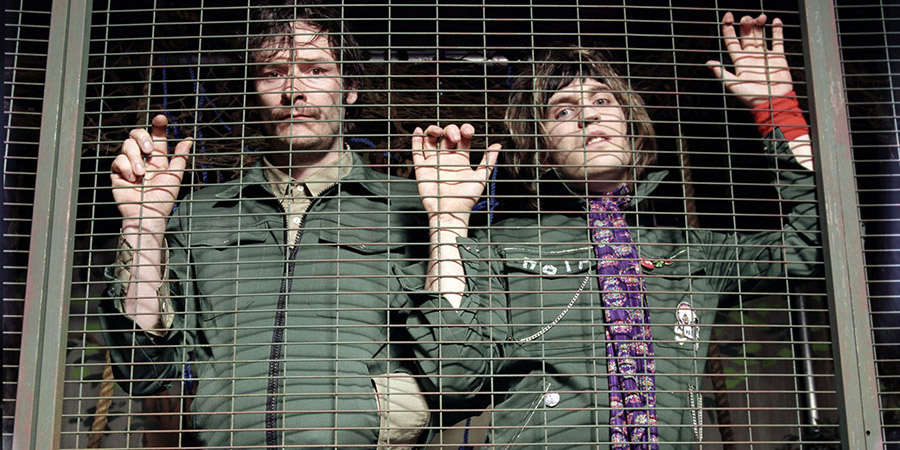 The boys of the Boosh

Starring and written by Julian Barratt and Noel Fielding, The Mighty Boosh is the epitome of surrealist comedy. From a Polo-visioned, big-thumbed Cockney hitcher roaming the woods to find the Fountain of Youth, to a washed up junkie fox who lives in the bins behind a boutique, the series introduces audiences to a vast array of absurd characters.

While our four main protagonists (Vince, Howard, Naboo and Bollo) remain a constant throughout the three television series, the incremental changes of setting serve as catalysts for narrative change, as well as signalling developments in character dynamics.

The Mighty Boosh television show (a follow on from the stage show and radio series of the same name) began its life in the Zoo-niverse, with a small core cast of characters. Five minutes ahead of every fashion trend, Vince Noir (Fielding) might easily be mistaken for an airhead upon first watching. His biggest concerns are the strength of his hairspray and the fit of his mirrorball suit, which stands in stark contrast to our other main protagonist, Howard Moon (Barratt). Howard is a lover of tweed, stationery and general organisation, so Vince is naturally a large source of irritation for him.

The pair work as zookeepers, despite being easily distracted and entirely incompetent at their jobs. They are joined by fortune-telling shaman Naboo (Michael Fielding), who works on the zoo's kiosk; and Bollo the gorilla (Peter Elliot in Series 1, later played by Dave Brown), with whom Vince forges a friendship when they discover they can understand each other. Rich Fulcher completes the line-up as zoo manager Bob Fossil.

For the majority of this first series, our characters are largely tied to one setting - although, even for a zoo, it is no ordinary setting, for this zoo certainly has mystical elements.

Nevertheless, the backdrop of the zoo grounds the Boosh's early narrative. Most incidents involve animals of some kind, from Fossil's illegal Killeroo boxing match to the arrival of mod wolves in the jungle room. Even when Howard gets mistaken for dead, it's monkey hell he ends up in, and when the Hitcher rears his ugly Polo head, it's as Vince and Howard are on their way to drop a delinquent bear at the Zoo for Animal Offenders. 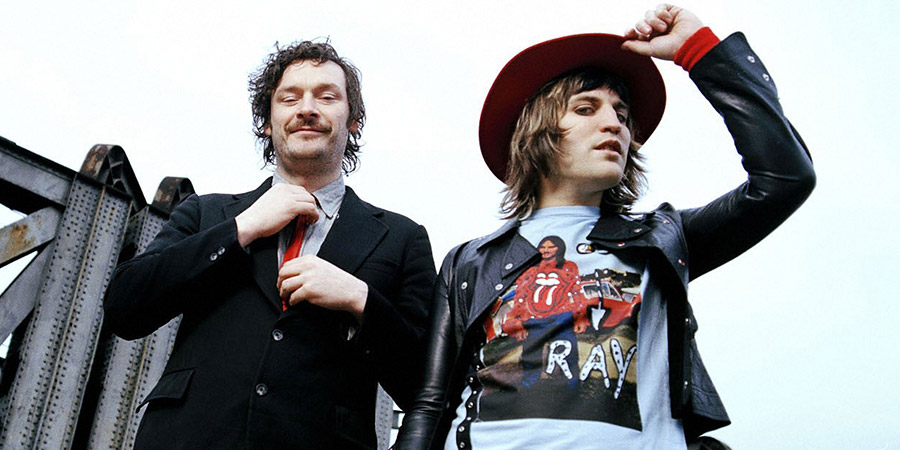 At this early point it's plausible to think of Vince and Howard as mere acquaintances rather than friends. Many of the tensions between the pair are caused by a fundamental difference in personality and interests. While Vince is initially portrayed to be superficial and shallow, as we watch the friendship develop it becomes obvious that Howard is in fact the more self-serving of the two.

On multiple occasions, Howard lets his own self-interest and impatience cause him to inflict actual or potential harm on Vince. In Tundra, he kicks Vince out of the tent into the snowy night, leaving him to be abducted by a polar bear. Later in the series, he accidentally leaves Vince locked in the panda enclosure. In both instances, Vince uses his interpersonal skills to get himself out of these sticky situations, and by the time Howard comes to help, there is no longer any need for it.

If you were kicked out into the freezing arctic night, or left to get attacked by a randy panda, you'd probably be forgiven for holding a grudge. However, this is something seemingly not in Vince's nature. With a childlike innocence and a will to be friends with everyone, he consistently forgives Howard's wrongdoings and continues to rescue him from his own dangerous predicaments. Series 1 sees Vince save Howard from a Killeroo, the Ape of Death, and attempt to save him from the Parka People. So while he can be a source of annoyance for Howard (he's seemingly good at everything, popular and charming), Vince is also habitually loyal and values friendship over everything else.

Series 2 (2005) brings with it a change of scenery and a subsequent shift in the character dynamic. Howard, Vince, Naboo and Bollo have moved out of the Zoo-niverse and into a flat in Dalston, east London, where they cause mischief as a bona fide quartet.

Against this slightly more mundane backdrop, Fielding and Barratt branch further afield within each episode, exploring ever-more mystical themes and settings. The series takes us to the Black Lake, a desert island, and even Naboo's home planet, Xooberon. The environments are more magical, and often sinister, and the characters match this. While leaving the zoo means saying goodbye to the likes of Bob Fossil (for a while anyway), Mrs Gideon and Dixon Bainbridge, room is made for a new set of recurring characters, in particular, the Board of Shaman (including Richard Ayoade as Saboo). We also meet the now iconic Old Gregg and the demon Nanatoo, and see the return of the Hitcher.

Despite the pair having apparently hung around together since school, now being flatmates suggests that Howard and Vince's relationship has become more of a friendship than it was at the zoo. However, it's not clear that Howard has progressed much in his own personal development, as it is usually still him who causes problems and needs rescuing from their consequences. The difference in this series, however, is that Vince no longer has to carry the responsibility of saving Howard on his own, as he has Naboo and Bollo on hand to assist.

This shift in character responsibility brought about by the new living arrangements is foreshadowed in the final episode of Series 1. With both Howard and Vince in trouble outside of the zoo (when taking Ivan the bear to Animal Prison), it fell to Naboo to try and instigate a rescue. Although unsuccessful on this occasion, Naboo was from then being set up as more of an ally to the pair, holding a responsibility to help keep them out of trouble.

Perhaps it is the freedom of not living at the zoo that glues these four unlikely friends together. They go on more ridiculous and treacherous adventures as a group now, and the shared experiences bond them, as is made ever clearer during Series 3. 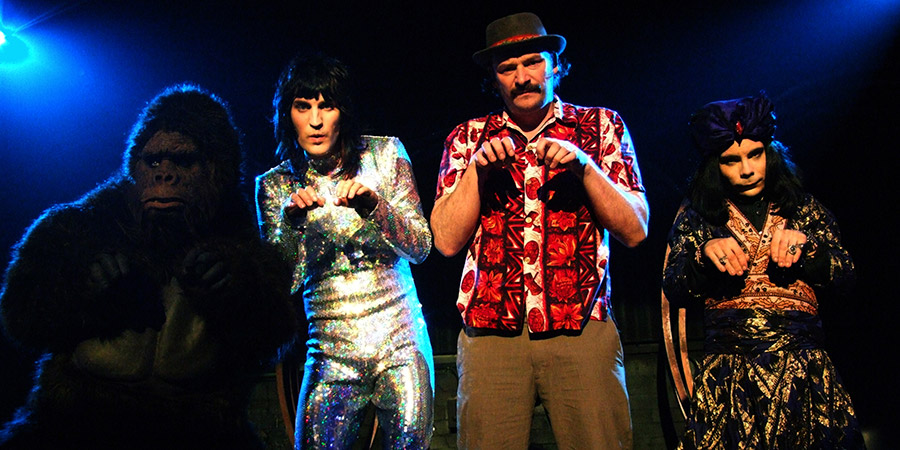 Series 3 is set in the Nabootique, a shop owned by Naboo, with Howard and Vince now working as shop assistants: it's a dream job for Howard as the shop is home to Stationery Village, and they sometimes sell elbow patches.

This final series feels almost as though the characters have come home. The episodes are largely grounded in and around the shop, with the weird and wonderful characters coming to them, rather than the protagonists going out in search of trouble (or Eggs of Mantumbis, or Fountains of Youths) themselves.

Creepy undertones amplified (the Hitcher returns to make threats on Howard's life and the Crack Fox introduces himself to Vince in the bins outside the Nabootique), the group face much clearer peril than in either of the previous series. The presence of genuine danger demonstrably unites the four lead characters tighter together.

For example, aside from their conflict in Journey To The Centre Of The Punk when Vince is trying to impress his new associates, he and Howard have largely come past their opposing music tastes. While the mod/jazz divide has been a source of conflict between the pair in the past, as the shows progress these two very different musicians learn to find a way to unite their musical skills against a common foe. This newfound common ground has its roots in Series 2's The Priest And The Beast, when the duo struggle to find a new sound to showcase to Pie Face Records, and comes to true fruition in the Crimp Off in Series 3's The Power Of The Crimp.

Is it fair to say that Howard Moon and Vince Noir are learning to put aside their superficial differences in favour coming together to achieve a shared goal?

Well, in Series 1 we fell into a pattern of a charismatic Vince saving an ungrateful and egotistical Howard from a variety of dangerous foe; and Series 2 saw Vince gain assistance from his friends Naboo and Bollo to remove Howard from these hair-raising situations. An important thing to note, however, is the reduction in the number of times he requires rescuing: only twice in Series 2 (one, an attempted rescue from a Yeti, and then from man-fish hybrid Old Gregg), and not at all come Series 3. In fact, in this final series we see Howard save Vince (albeit reluctantly) for the first time, when his blood becomes infected by a jazz cell.

Perhaps this role reversal signals the beginning of a more equal, less self-serving friendship between the two. Or perhaps Howard has just finally learned that he actually, deep down, loves Vince (maybe even a little too much...), and wouldn't want any real harm to come to his dear, annoying, easily distracted friend.